The Butcher from the Whispers[1]

Nara is a strength-based warrior hero of the Graveborn faction. She stuns enemies with her hook, drags enemies towards her, and drains the energy of heroes who attack her. She was added in the 1.18 patch.

Nara's ultimate ability "Butchery" allows her to damage enemies while ignoring any invincibility or defense boosts they may have.

Growing up in a crooked community where light and hope was absent, violence, crimes, unrest, and hunger had been Nara's companions. She learned to do whatever it took to stay alive. When she met Sonja, the two wandering souls finally found someone to lean on. In the city of sins, they looked out for each other when seeking a way up.

Struggling at the bottom of a cruel society, Sonja and Nara played by the rules of evil, concluding that their only chance of escaping the fate of being bullied was becoming the most vile of them all, ones who would be feared even by the most ruthless of criminals.

They thus started their guild: the Whispers, whose size of operation grew tremendously as their ambitions mounted. The gang finally became a formidable network in Rustport engaged in slave trade and other highly-profitable criminal acts. The sinful yet lucrative deeds drove Nara, whose innocence was long gone, to a darker place. Thanks to the interference of Sonja, however, Nara didn't lost complete control of her mind.

Then the shipwreck happened. Drowned and resurrected, Nara was set free from the limitations of a human body. The last bit of humanity in Nara was gone, and so were the memories about Sonja and the Whispers. Now captain of the ship named Spirit, Nara believes only in violence and slaughter.

The city known as Rustport may have once had a more conventional name, but if that is in fact the case, it has long been forgotten. A sprawl of ramshackle structures that sway and creak in the salty winds blowing in from the sea, taverns lean against gambling halls and establishments of ominous repute like crooked teeth. For every baker there are two thieves, for every blacksmith two pirates. When the sun sets, the woefully few honest citizens bar their doors and secure the latches on windows. It is a rare night indeed that passes in Rustport without a murder and a rare resident who has not seen the body of a victim by the time they are able to speak. Within this city lies a district where not even the city watch will tread after dark- Mire Town.

It was here, among sludge-slick alleyways and chittering swarms of rats that Nara was born and raised. As an infant, her mother abandoned Rustport and the family she had there, unwilling to suffer the place any longer or see her daughter do the same. Nara’s father was deeply in debt to a criminal enterprise, but still managed to keep his daughter fed and sheltered, paying meager installments to the gang without incurring too much physical injury. This continued for a long time, until Nara was nine years old and the criminals discovered that not only had her father not been paying as much as he could, but that he in fact had enough coin stashed away to pay off the entirety of his debt.

After abducting and “interrogating” the debtor, a confession was pulled out. He had been saving the money to skip town and start a new life with his daughter somewhere far away. Having what they needed, they disposed of him: A lesson to other would-be debt evaders. Orphaned, Nara was thrown out of the hovel she had shared with her father. She wandered the streets, stealing and scavenging to survive.

Every day was a fight for survival, and Nara quickly became callous and mistrustful. The other people on the street were simply targets or hazards, and she began to lose any sense of warmth or compassion she once had. The people she did engage with were invariably others like herself- orphaned children and runaways getting by however they could. Eventually, she found herself at the head of a small thieves guild alongside Sonya, the only other child who could match her abilities. They called themselves Whispers, for the faint whisper coins make on cloth while being picked out of pockets.

As season after season blended into another, they subsumed the smaller child gangs until they were the largest network of thieves in the city. The size of their operation had grown tremendously until there was hardly a street corner in Rustport that didn’t have a Whisper lingering, waiting for a chance to make a quick profit. Other gangs of course wanted in on the Whispers’ turf at first, but Nara was quick to show that she was capable of much more than theft. After the initial disputes, those who didn’t work for her stayed out of her way.

After dominating the city’s criminal underground while still just a teen, she began to look at expanding her horizons. The most profitable market in Rustport certainly wasn’t pick-pocketing, even at the scale she commanded. Rustport has a bustling slave market, a plaza drowning in the noises of commerce and despair. Maulers slump in their chains next to Wilders, men, and other peoples of Esperia. Here the only distinction is between master and slave. If she wanted to make the real money, she’d need a good ship and lots of manacles.

The first expedition she attended personally. Though she was well past the stage in her career of doing the dirty work herself, she wanted to oversee this new venture. She selected Azure Cove as her target, a patch of water lending access to the forests of the Wilders. What she didn’t know was that Azure Cove had a new protector. When her ship sailed in, Seirus the elemental sensed the malicious intent from the crew. In a single great wave, the ship was capsized, drowning all aboard. Nara’s body sank softly to the bottom of the cove. Her story was over, it would seem. For days she lay there, the seaweed brushing against her pale, open eyes. Then, one night, the husk that had been Nara received the call. With a sickly flicker of green light, her eyes cast about the seafloor and she stood, trudging toward the shore.

If Nara was cruel and violent in life, she is far worse now. She takes great pleasure in the harm she can cause others, and does so as often as she can.

Cruel and graceless. Crafted for butchery and slaughter. 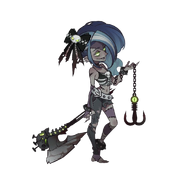