Mr. Wake[1] is the host of the Magician Hat event, for which he collects innumerable goodies. He is a magician in the traveling circus' "Megamouth Shark Troupe". 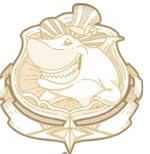 The Megamouth Shark Troupe is Kuilin City's resident Circus Troupe. They hold big performances three times a month and every one is a sell-out show. Performances include knife juggling, fire-breathing, trapeze artists, and comedic clowns.

As well as performing in Kuilin City, the Troupe also travels the world putting on shows. The Megamouth Shark Troupe has brought laughter to every corner of Esperia, and the Troupe's Mr. Wake has collected innumerable goodies from all over the world.

Only the Megamouth Shark Troupe's most loyal audience members can redeem the Commemorative Medal for Mr. Wake's exclusive treasure.