Morvus is an agility-based marksman hero of the Lightbearer faction. His purpose is to deal damage to his enemies and quickly finishing off heroes at low health.

His ultimate ability "Sharpshooter" is unavoidable which is the bane of most heroes with high evasion.

The most elite, the most feared fighters of the Dwarven Territories are without question the King's Musketeers. The musketeers report directly to the dwarven king, Asgan, and no one else. The ranks of this storied regiment are not easily joined. Each of its battle-scarred members has proven his mettle through an arduous, life or death trial. The Marksman's Hunt is the process by which aspirants to the regiment are chosen. A young dwarf must venture alone into the vast, icy nothing that lay adjacent to the Territories. He is allowed only a dagger and an unremarkable blunderbuss, with its small pouch of ammunition. To pass the test, the hunter must return before the following dawn with the head of a creature befitting the ferocity and reputation of the regiment. That is to say, anyone returning with the head of a snow hare won't be receiving a warm welcome from his would-be brothers in arms. Conditions on the hunt are intentionally harsh and unforgiving, and it isn't uncommon to never again see those who set out into the frozen dark with their meager supplies.

Of all the marksmen in living memory, the one with the most impressive quarry taken in the hunt is Morvus. Morvus prepared as well he could for the trial ahead of him, eating well and conserving his energy in the few days leading up to the test itself. He selected the best black powder and meticulously checked the components of his weapon, oiling it and testing it time and time again. Finally, he stepped out onto the frigid waste, just he and his gun, ready for whatever may come his way. He knew that though the extreme cold could easily take his fingers and toes and possibly even his life, the real dangers were more vicious. Great ravenous beasts lurked among the snow-dusted flats, creatures that never missed a meal when it was presented to them.

Through an odd combination of fortune and terrible luck, the first creature that the headstrong dwarf happened upon was a freakishly large specimen of the frost bear. Frost bears are already among the largest predators to roam the land, and this one was a giant even among them. No doubt the two-ton beast looked at Morvus and saw nothing but a morsel that would hold him over until breakfast.

Had it been anyone but Morvus there, the size of the thing alone would have stopped them in disbelief. He resolutely and quickly assumed the firing stance, his lone dark figure stark in the moonlight against the white ground. The thing roared, and the sound reverberated through his solid frame. His ribs seemed to shake as his heart was knocked off beat. He fired his first round. It struck the bear in the shoulder. The white shape loped toward him, seemingly unaware of the dishearteningly small stream of blood running down its white limb. With a calm, steady precision, Morvus stepped backward as quickly as his short legs would allow while reloading and firing in rapid succession. The bear, now bleeding from a handful of wounds it hadn't had seconds before, closed with Morvus and swiped with a paw large enough to kill a mounted knight and his horse in and instant. Morvus ducked, tucked, and rolled, managing to load his last slug before swinging the weapon upward. The monstrous animal went in for a killing bite, but in the instant before its jaws closed around the courageous and arrogant little hunter, there was a flash, a deafening blast, and a spray of hot blood. The slug had landed in the frost bear's eye. It fell heavily, crunching the frozen ground beneath it, terrifying even in death.

Laying down, the shoulder still rose well above Morvus' head. Returning with the massive head would require more than one person. He instead extracted a tooth, rushing back to Asgan's hold before dawn. It was estimated from the size of the fang that this bear was likely the largest ever taken in the Marksman's Hunt. His admittance to the musketeers regiment was, of course, ensured. He would serve directly under the king for most of his life, until the years caught up with him and he retired.

After the destruction of the dwarven homelands, Morvus once again took up his gun, resolving to lead the remaining marksmen to join the forces of their allies in the frontier lands, fighting against the demonic forces which had taken his home.

“The best things in life are black ale and black gunpowder.” 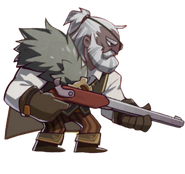 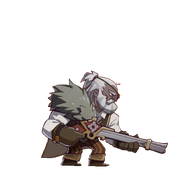