Mishka is a strength-based tank hero from the Wilder faction. She fights along 2 wolves by her side. Wolves increase the damage enemies take from Mishka's attacks and use their control abilities on her enemies. Mishka can also use a healing resin to help her allies.

In a clearing in the Dark Forest, a huge bear and a pair of wolves are playfully chasing each other. Bounding around in their horseplay, they collide into one other and in a bundle of flurried fur they tumble down the clover-covered slope, half growling, half laughing. Perhaps the sun itself, beaming high above them, was infected with their giddy joy as it sailed beyond the distant hills unnoticed, staining heaven and earth a spectacular scarlet hue.

“Mishka. Time to come back, you need to train.” The husky voice of an elderly man was heard from the forest. The huge bear shook its head and waggled its ears, shaking off some loose grass, as its body began to shrink and its fur seemed to recede and fade away. Where the bear once stood there now stood a young girl. This young girl is Mishka, a Skinshifter.

Turning to look at the source of the voice, Mishka exclaimed gleefully and sprang over, enthusiastically launching herself high into the air, “Master! HUUUUUUUG TIIIIIIIME!”

Mishka, mid-air, instantly transformed into a huge bear. The old man’s face suddenly dropped as he realized what was about to befall him; an enormous shadow completely engulfed him, and Mishka the Bear crash landed hard on top of him, sending dust flying and startling a nearby flock of birds.

The dust settled and the air cleared. His feet were sunk firmly up to his calves in the muddy earth, but held firmly in his arms was Mishka. “What foolishness! You’re not a child anymore.”

Jumping down from her master’s embrace, his arms now trembling from effort, Mishka transformed back into her young girl form. Despite her playful appearance, her facial expression was clearly one who knew they were in the wrong, but would absolutely do it again.

The old master and Mishka had first met ten years ago. At the very edge of the Dark Forest, a pair of wolf cubs cowered beside their mother’s corpse, a determined young girl standing before them, all that stood between them and a poacher. The scene left a deep impression on the old man, the unyielding stubbornness that burned in Mishka’s eyes was endearing, he wanted to save her.

The poachers gun was trained firmly on Mishka. The very instant the old master braced to intervene, Mishka let out a deep growl, her form suddenly changing into a huge bear. The desperate little girl was now a ferocious beast. Turning to face her opponent, she lunged furiously forward, leaving no room for escape. The old man immediately recognized this little girl’s identity – a Skinshifter of the Dreamwood. The Dreamwood exists at the brink of the material realm, straddling between that which is real and that which is immaterial. The magic there warps the laws of physics, and some Wilder folk who frequent the Dreamwood developed unique traits, absorbing this magic. Gradually, this allowed them to transform themselves, and they became known as the Skinshifters.

The old man finished off the poacher as he tried to flee, then hurried over to Mishka, collapsed from exhaustion in a heap on the ground. “You’re coming with me. I’ll teach you to stand up for yourself.” Mishka didn’t utter a sound, her eyes locked on the wolf cubs. “They’re coming, too.” The old man added. A tired but genuine smile bloomed on little Mishka’s face.

That day, he formerly became her master, taking her as his only pupil; the young girl, who had been alone for as long as she could remember, now had a new family.

Even if training was tough, now that she was no longer lonely and had company, Mishka could handle anything that came her way. After every training session, she would leap high into the air, allowing the whistling of the wind to soothe her weariness as she fell into the awaiting arms of the old master. Seeing her progress, the old master took delight in Mishka’s success and shared her happiness… At least he did until she learned how to transform in mid-air. That day was very nearly his last.

Every day she grew a little bigger, and every day her master’s arms grew a little thicker. The wolf cubs also grew into imposing looking males – except when they wagged their tails. It was time for the fledglings to fly the nest and strike out alone in the world, they were old enough now to stand on their own feet. It was time to say goodbye. Mishka bundled up her belongings ready to leave, then turned to her dear master, embracing him in a tight hug that made a number of his joints crack. The wolves wagged their tails happily at the old man before chasing after the young girl. Under the setting sun, the silhouettes of one human and two wolves stretched ever longer. Carried by the wind came the young girl’s voice, “When I get back, master will have to catch me!” 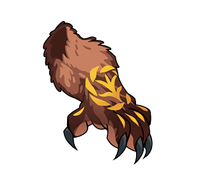 After years of training, Mishka was able to keep certain parts of her body in bear form all year round. These sharp talons are her most powerful weapon.

When Mishka’s Ultimate ability ends, she receives 30% Damage Reduction for 8 seconds. If this ability is used again while the Damage Reduction effects are still present, its effects and duration will be reset.