The Midwinter Festivities Event was a limited winter themed event consisting of 3 mini-events:

“Frigid air blows down over the lofty mountaintops and crash on the shivering lowlands like an avalanche. The winds howl the song of the Frozen Mother. Winter has arrived.”

-excerpt from a dwarven hunting journal, recorded by Gretel Hawke.

Atop snow-capped peaks, far from the reach of even the most adventurous mortals, lies the home of the gods. When winter arrives, Esperians will sing songs and prepare for festivals to honor the goddess of winter. Though she is known by many names: The Frozen Mother, Frostbearer, Snowsong, and many others, all refer to the same goddess.

Alna, The First Winter. Most portrayals of Alna show a stoic, strong woman hefting a sword of ice. These are accurate, and her personality is every bit as cold as her outward appearance. She is a solitary being by nature, and even on the rare occasion that one of the gods will seek her out for one purpose or another, she offers few words and little hospitality. She is the embodiment of the season that drives people indoors to huddle around their hearths, the season that freezes cattle and sheep in the fields and denies living things the bounties of the land. She is cold and unforgiving, and an inevitable part of life. This wasn’t, however, always the case.

Millenia ago she was a much less powerful deity with a far shorter reach. Simply a guardian of the mountains. A protector of the high places. In those days, winter didn’t exist. Years passed without change in a state of constant bloom and snow was something of which no mortal had ever dreamt. It wasn’t until the first demonic invasion that the full extent of her hidden power was realized. The invaders were spreading everywhere, and eventually they entered Alna’s realm. She fought them off, but they seemed to be without number. No matter how many she slayed on the slopes and clifftops, there were more. In her anger, she let loose a shriek that echoed through the valleys. With it came blasts of freezing wind and, for the first time, snow. The invaders were buried in drifts and frozen where they stood, their bodies locked forever into huddled positions. The cold didn’t simply cover the mountains, however. It swept down through the land. and thus the first winter was born.

Every following year Alna has shrieked from the mountaintops, ushering in another winter. Though many mortals bemoan the difficulty and discomfort of the season, it brings with it some benefits. The spread of disease is slowed or halted and rot is staved off. Great beasts go into hibernation and the hardworking folk of the fields get time to rest indoors. Winter is a time of bitterness and an element of danger, but also a time of cheer and togetherness. It is with her season that Alna reminds the mortals of Esperia that sacrifices must be made in order to reap rewards. 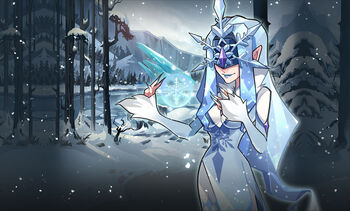 Ice Shemira is a mini-boss fight featuring a variation of Shemira in a winter skin. The fight was available for 10 days when it first released. Ice Shemira also made an appearance in the Twisted Realm as one of the 5 bosses to fight in.

The keys can be used to unlock tiles on the Midwinter Surprises page. You can repeat the battle with an unlimited number of attempts, except with the certain number of Glacial Keys earned.

Ice Shemira summons snowfall 10 seconds into the battle which falls heavier every 20 seconds. While there is light snow fall, all of her enemies will be unable to recover any health. While there is heavy snowfall, her enemies will also be dealt periodic damage. Each time Shemira summons snowfall or increases the severity of the snowfall she will receive a layer of frost armor which, when active is immune to all damage that is lower than 30% its total value.

Ice Shemira prioritizes her attacks against two frontline enemies, channeling her glacial beams to deal multiple instances of damage over time to the enemies. The glacial beams also possess a freezing quality which stacks over time, reducing the enemies' Haste.

Ice Shemira creates an expanding shockwave of ice that damages all enemies. Enemies that possess less than 50% of their max health will become frozen.

When the northern winds batter at the door and frost rims the windows, Shemira becomes reflective. She recalls that winter which now seems like forever ago. Her son, only two years of age and barely able to stand on his own two feet, bundled tightly against the cold seeping into their home and looking out at the driving snow with wonder. She remembers the way his breath, so warm, fogged the panes of glass.

This was contentment. She remembers the messenger at the door. The skirmishes were happening with more frequency. They needed more men. More healers and medics, he explained. They needed her husband.

Niru left the next morning and though she had been assured that he wouldn’t be at the front lines, she had a nagging feeling that scratched at the back of her mind. She felt as if something was going wrong. As it happened, she was right.

The fighting continued unabated. What she had expected to be one difficult season turned into several. Eventually even the longing she felt became a dull kind of pain after the seasons turned to years. She received news with some regularity, him ever optimistic, but now the letters were more a curiosity than the lifeline they had once been. She read over them distantly, barely internalizing the words on the page. After all, if he wasn’t there then what good was this? It was like talking to the dead.

All the while, their son grew. Shemira did the best she could on her own but the burden was heavy. She had good work as a tailor, fashioning dresses for noblewomen and wives of the wealthier merchants. She would spend long hours over the fabric, working her needle with a careful hand. Sometimes she would think briefly of Niru and wonder if he too was holding a needle, sewing up some wound rather than fine cloth, somewhere far away from his true duty here at home. Each year when winter came she would watch out the window as Daimon, getting bigger all the time, would play in the snow. She wasn’t unhappy, not truly, but something was certainly missing.

Her joy was short lived. The man who had left their threshold that day years ago was not the same as the man who’d come back. He was gaunt, disheveled, with a feverish glint in his eye. Getting settled back into their old home, he spoke at a frantic pace of the things he’d seen. He went on and on about the graveborn they’d been fighting, saying he’d learned more from them than from all his previous studies.

“They don’t tire! They require no food or rest. They feel no pain!”

She knew now that he had been right about most of his claims, but there was one that he had misunderstood. Years more had passed since his return. Years more than that had gone by since she had herself undergone the transformation. It was true that she never felt hunger. It was true that the icy winds swirling around her caused her no discomfort. It was not true that she felt no pain. She was consumed by it. Every memory of her old life was overshadowed by the memory of Niru’s trial and execution and the subsequent death of their son.

She stood alone in the cemetery with only her wretched memories to accompany her. Cold tears froze on her face. She screamed her anguish into the howling wind, and the spirits of winter heard her call. The flurries of snow became ever more animated, circling around her in a vortex. She imagined that once or twice she saw faces in the whirling white. When the winds finally subsided, she was donning gossamer sheets of frost. She was the image of death. A perfect picture of endings.

The Midwinter Feast is a guild event where you can earn more Glacial Keys, and then exchange them for rewards. The event was available for 8 days.

The Midwinter Surprises is an event where you can exchange Glacial Keys for different types of rewards. The event lasted for 16 days. Players will choose the ultimate reward for each island whether it is a hero or fifteen faction scrolls. When the ultimate reward has been obtained, the player can choose to advance to the next island or may also continue to stay searching on the current island. When the event is done, the remaining Glacial Keys will be recalled for 250,000 Gold coins.