Mezoth is a strength-based tank hero of the Hypogean faction. He excels at health recovery and can retain an increased max health at the beginning of battle.

Mezoth's ultimate skill "Devour" grants immunity to enemy control abilities while his health is higher than 50%. It also allows him to devour an enemy target, imprisoning them for an amount of time parallel to his own energy. During this time, the enemy is sapped of health.

We’ve been docked at Rustport for three days and I’m eager to get away from this wretched place. I suppose it comes with the territory of being a smuggler. Only in a wretched place like this can we find willing buyers. Just yesterday a firefight erupted between the Whispers and the Sea Devils resulting in the death of one of our men, the cook. The captain had no choice but to seek a replacement cook to complement the crew.

The new cook looks unkempt and gives off a foul stench. He doesn’t have many possessions of his own, but he carries a statuette of what I assume to be a mythical creature. The statuette is a strange-looking thing. Four arms and a gargantuan belly with a gaping hole that looks like a mouth. Rustport has no shortage of fringe religions and cults, but I've never seen anyone worship something like that before. He’s a shrewd looking fellow and doesn’t speak except to answer questions with a word or two, at least for his fellow crewmates. With the captain, he’s been plenty helpful. Not the first time I’ve seen a new hand trying to curry favor.

We are now a few days at sea, a good distance from that stinking pit of a town. The weather, for the most part, has been clear, but dark clouds formed in the distance this morning. I’m not sure what that cook has said to the captain, but they spoke long into the night and the captain is now insistent on sailing toward the misty weather ahead. I can see no positive outcome for these actions. I will give the cook some credit, though. The meat he’s been serving is like nothing I’ve ever tasted before. Passing through the galley in the darkness of night, I saw the cook praying to the strange-looking statuette. I wasn’t sure if I was imagining things or if I just hadn’t woken up properly, but I could swear that I saw the statuettes’ stomach open wide and smile. I told a shipmate of what I’d witnessed. He simply laughed and asked if the life at sea was finally starting to wear me down.

What is happening? A heavy mist enshrouds the ship, refusing to disperse. I’ve never seen the weather act in such a way. We now have no way of finding our bearings. I recall an old sailor talking about a place called the whispering waves, a place that once a ship enters, it cannot escape again. Could this be that very place?

I’ve lost track of how many days we’ve been adrift in this damned mist. Daylight is now beyond our reach.

All food on the ship has been consumed, including all rats that used to scurry around below deck. The sea appears to be dead, with not a fish in sight. Jace was the first to lose consciousness. He was already thin to begin with, and now he’s nothing but skin and bones. That said, we’ve all become gaunt and weak. The cook even in his current state still clasps the statuette fiercely, as if frightened someone may take it from him. He’s mad. It’s not as if the thing is edible.

I caught the fragrant scent of meat from the galley. I stumbled towards the galley with the little strength I still had left. I could see the cook entertaining the Captain, the first officer and a few other sailors. He seemed to be dishing them out hot soup from a large pot. I took one for myself, trying not to think of where this meat could have come from. I was too hungry to think of it. The bones were not from a fish.

The meat is dwindling. I’m worried about what’s going to happen, There are still several mouths to feed. Recently I’ve noticed the cook watching us, so I’ve made it a point to act as if I’m hardly feeling the starvation. I don’t want to be picked out as one of the weak ones. I know what’s happening here.

I made my way into the galley while the cook was away. I hid underneath one of the cooking benches and waited for him to return. He was fast and he used his jagged meat-saw to retaliate. He managed to carve out a deep slash on my gut. My blade, however, found one of his arteries. He stumbled slowly towards the statuette, trailing slick crimson as he did so. He shouted at the statuette: “I have given you so much, sacrificed so many for you! Save me, Mezoth! Save me!” If his god heard him, he chose not to answer. Looks like meat’s back on the menu.

I am the last here. My hunger was the strongest The floor of the galley is red and the wound on my abdomen festers. The one that hungers watches me from inside the statuette. My wound festers. I dreamt that it opened, full of gnashing teeth, so that I could devour the whole world. 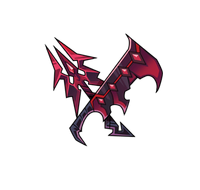 Two vicious tools used exclusively to butcher and maim victims that exist as symbol of Mezoth's depravity. It is said many poor souls bear the scars of Mezoth's wrath on their bodies.

Hero gains 200 energy points at the start of battles. 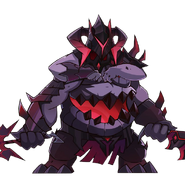 Mezoth's cameo in A Memory of Lucretia.