"Do you have everything you need?"

Melusina or "Baba Yaga" is an intelligence-based mage of the Dimensional faction.

She is based on Baba Yaga, a supernatural figure in eastern European folklore.

This hastily-scrawled note caught your eye as you searched your friend Jason’s makeshift shelter. It has been two weeks since he reached out to you, and you had exchanged several letters before suddenly losing all contact eight days ago. Since then, all the missives you sent have gone unreplied.

As a fellow bounty hunter, you are well aware that only a particularly lucrative contract could have led him to this tiny village, bordering the dark forest, to investigate some mysterious disappearances.

All the missing are children, both boys and girls, from toddlers on up…

You received Jason’s letter requesting help but you never would have thought that, by the time you got here, he himself had disappeared as well.

You asked the locals about Jason, who either fobbed you off with half-hearted excuses of ignorance, or just silently stared at you with empty, numb eyes. Such reactions made you exceedingly uncomfortable, but you supposed you could understand. This village had lost almost all its children, after all. You could only imagine how unbearable such a tragedy would be if it happened to you.

You put down the slip of paper, which seems nothing more than a random note. Judging by other clues you have spied in and around his shelter, you are pretty sure that Jason’s last destination before he disappeared was that creepy old forest next to the village. Clearly, Jason had the same idea as you: that those children vanished after getting lost in the forest.

So there’s nothing for it. You decide to head for the forest and investigate. But Jason’s disappearance weighs heavily on your mind, and you make sure to bring everything you might possibly need. Yet, whenever you mentioned the forest to the villagers, they all presented a consistent response: saying nothing whatsoever about what lay within.

With early morning mist wreathing through the forest, you carefully pick your way through the trees and shrubs. Following the subtle marks you knew Jason would carve into the trees, you soon come to a relatively spacious clearing.

Sure enough, it looks like someone rested here. Striding forward to take a closer look, you step on something hard. You look down and discover a notebook, its cover slightly rolled up.

Rather than appearing accidentally misplaced, this notebook instead seems to have been carefully placed, just waiting for someone to stumble across it. You do not consider this too much, however, as concern for your friend’s safety makes you ever keener to discover just what is contained within his old notebook.

Hastily flipping past pages of irrelevant notes detailing daily life, you eventually come across entries from the days during which you had lost contact.

Even little Alan is missing now. He was the last kid in the whole village. No matter what it takes, I swear that I will find him and bring him home.

It has been a long while since the first time I entered the forest, but it still feels just as peculiar. This pervasive strangeness merely reinforces my previous judgment: that children would never willingly venture deep into the forest by themselves. Could they have been lured away by some monster lurking in the darkness, maybe that huge dark shadow I saw myself just the other day? … Regardless, it is time for me to move on.

I lost my comrades the last time I entered this cursed forest. This time, however, I believe I am well enough prepared.

Always remember: do not stay in any one place too long in the woods.

The forest is misty today, which makes an already difficult task even more challenging. Paths which are hard to follow at the best of times become even more treacherous.

I managed to follow Alan’s trail well enough, all the way to this spot. But now, there is no sign or trace of him at all. It’s almost as if he just vanished into thin air. How am I meant to track him now?

By the Divine Light, even the Hypogeans never made me feel so totally, utterly helpless. It’s like this monster just materialized right here, leaving no way to follow its traces back to its lair. Perhaps I should start preparing for the worst…

I got lost in the cursed forest, much to my chagrin. But when I peered out into the dark depths, trying to find a familiar sight, I saw again that huge, ominous shadow.

I managed to get a better look at it this time, only to see a pair of feet just like those belonging to a Steelthorn Hen. By the Divine Light, I swear I’ve never seen such enormous feet!

I can’t believe it didn’t see me! But I saw something else strange—a woman, standing all by herself in such a perilous place. She turned her head and looked at me with green eyes that shone like the most beautiful emeralds. Her gaze was so soft, so delicate… I simply could not ignore it.

All I could think about was taking her away from such danger but, to do so, I had to alert that giant monster to my presence. I could hear the terrible sound of those fowl-like feet scratching the grass as it followed hot on our heels. Crows appeared out of nowhere and hovered overhead, their nonstop caw grating hoarsely in my ears like a dirge… Dared not look back, I could only summon my courage and stumble through the forest. Finally, the noises behind me diminished, silence finally falling once more. It appeared as though the Divine Light had smiled upon me once again.

As I write, that beautiful, mysterious lady is sitting beside me, looking terrified. Her hat had fallen off during our escape, revealing gleaming white locks… I must ask her what happened, how she came to be here.

I curse the day I took this bounty and regret being greedy for such a large reward. How was I to know that not only the forest, but also this whole blasted village, would be full of secrets?!

The woman, whose name was Melusina, revealed to me that the villagers had an unhealthy obsession with boys and abandoned baby girls deep in the treacherous forest. Then, they spread word of evil monsters in the forest who were snatching and devouring children, hoping to assuage their own guilt with these rumors.

It wasn’t just babies, either. Quite a few young girls were also taken to the forest and abandoned, left to fend for themselves. Older girls were either sold off as wives to neighboring villages, or allowed to remain for the sole purpose of bearing more boys… Such behavior is disgraceful and outrageous, but at least I finally understand why the villagers were so reluctant to discuss the situation when I first arrived.

However, if this really is the truth of the matter, what on earth has become of those missing boys?

Melusina delicately crossed her slender legs and clasped her hands around her knees, tilting her head and grinning at me, said “Why, because they deserved it, of course.”

I couldn’t help but shudder upon hearing her words.

(The following has been hastily scribbled.)

I finally managed to get away, to escape Melusina at last! That woman is the real fiend! The monster with the giant hen feet is hers! It’s her HOUSE!

If I hadn’t woken up in the middle, seen her walking silently deep into the forest, and decided to follow her... I probably wouldn’t be alive to write this.

At last, I know where all the people who disappeared had gone. My comrades, little Alan, the boys… Not just them, but even the man who had issued the bounty in the first place! Oh, that bounty… This is all because of that cursed bounty!

“Oh, did I startle you?” Melusina seemed to have been well aware that I was following her. She appeared not the least bit surprised and even played with the crow that landed on her shoulder. “I must have forgotten to mention… I, too, had lost my daughter like that, before I became darling Yaga.”

“Even though it has been a long time… Such a very long time…” She looked at me with a chuckle and I watched, horrified, as her body gradually grew wizened and bent her face sagging and creasing with myriad wrinkles like an ancient crone’s. “But you know, the older you get, the clearer you can remember the things that happened in your youth. Like the agony of having your daughter taken and abandoned in the forest. Like the hatred at feeling so powerless.”

As she aged and turned decrepit before my very eyes, the blazing insanity buried deep in her emerald eyes bubbled to the surface. She mumbled and raved, as if losing all reason: “You look so strong, yes, so strong. That’s just what I need to protect my daughter, yes… Do not run, dear. I’m only borrowing what’s yours. You can have it back right away.”

Run I did, however, fleeing from her horrible form. Yet no matter how far I fled, I felt that something seemed to have been taken away from my very core.

If anyone should find and read these words then please, heed my warning! You must leave immediately, and never look back… (These words are crossed out, with amendments written in elegant, neat handwriting just below.)

It ends there. You flick again and again through the pages, hoping to find any more clues about the forest, the mysterious woman, or her strange abode, which could help in your search for Jason.

Ultimately, however, you’re forced to accept the reality that this is the last clue you will ever find.

Just then, a soft voice comes from behind you. “Good sir, I’m in a spot of trouble. Might you be so kind as to help me?”

Turning around, you see a young woman with long, flowing white hair streaming in the wind, clutching her red hat and smiling demurely at you.

Behind her, deep in the depths of the forest, a huge shadow seemed to flash through the darkness.

Recalling the eerie hut in Jason’s notes, and the young lady named Melusina, you involuntarily take a step back, watching her every move.

The smile that twists the corners of her mouth grows ever larger as her emerald eyes flash brighter in the depths of the dark forest. 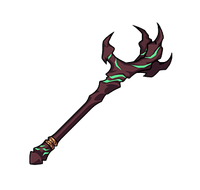 This staff full of mysterious magic is Melusina's main source of power, and is what she uses to manipulate and bend things to her will. Melusina uses this staff to summon mystical objects, and to communicate with animals.

When the skill “Soul Pilfer” is continuously stealing attributes from an enemy, it shall also steal 30 Energy points from them each time. 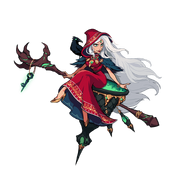