Mehira is an intelligence-based mage of the Hypogean faction. She possesses wonderful crowd control abilities. Mehira is able to reduce enemy's damage, but also deal AoE damage, and recover energy for allies and health for herself. Combined with signature item, she has strong life-leech abilities. She can also prevent her own death by sacrificing her cast minions.

Her ultimate "Mesmerize" entrances enemy heroes, causing them to attack themselves.

Mortals wage a constant battle of the self. A struggle between will, temptation, indulgence, and restraint. This internal battlefield is where Mehira, the Mind Cager finds her prey. Even those with iron-clad convictions find themselves unsuspecting victims of her terrible power, bent to the seductive whispers of her depravity.

Mehira can sense proclivities in individuals of which not even the people themselves are aware. She plays on subconscious impulses as if a harp, plucking strands of shameful desire to bend peasants, clerics, paladins, and kings to her will. No amount of worldly status or piety is sufficient to withstand the shadow she casts over the living spirit. Esperia is scattered with her slaves, people from all walks of life, by outward appearance like anyone else, but whom on the inside are obedient worshippers, so accustomed to the lash of their perfect master that they crave it. The anguish gifted them by the object of their devotion is superior to any tangible  pleasure they could attain through their own means, and thus they are absolutely devoted, forgetting who they once were, heart and soul broken into new forms, existing solely to seek sensation.

It is Mehira’s own nature, her fickleness, that has saved the realms from her nearly immeasurable power. She craves challenges and seeks to accomplish greater and greater things. The ease with which a mortal mind can be ensnared, the simplicity of subjugating the spirit, have bored her. She had been playing a game without an opponent- an insult to her true potential. It wasn’t until an unforeseen encounter with a very unusual subject that she felt once again that near-forgotten twinge of curiosity and perhaps even danger.

She came across a presence, something that bore the signature of prey, but somehow different. There was something else lurking under that signature, something tied so closely to it as to be melded into nearly the same identity. She approached, weaving the snares and casting them toward the intruder. Her magic sizzled and dripped away from the figure. What would usually have bound the target in an agonizing hold had no effect, and the next thing she knew, a flurry of crossbow bolts flew to meet her, brushing against her wings and rasping along her neck. With a shouted command and imperious gesture, the shadows erupted with thousands of screeching bats to cover her escape.

For the first time in recent memory, she had found something that sparked her interest. A new force capable of withstanding, at least for a moment, the spiritual corrosion she wielded like a scythe. This meant only one thing. There were spirits yet remaining in this world that she had not yet taken as her own to mold. There was still a challenge, a new thing to be captured, to be bent, to be broken.

“Don’t be shy. I already know what you’re thinking.” 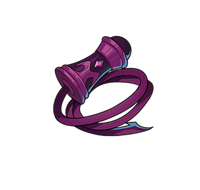 A whip, the touch of which enslaves its victims. The tool of a cruel master.

When any non-summoned allies lose health, 10% of the health lost will be given to Mehira. 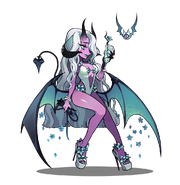 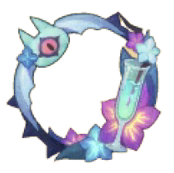