Lucius is a strength-based tank hero of the Lightbearer faction. His skills are focused on stalling the enemies in front of him. He also has skills which can heal allied members as well as give himself a strong shield to boost his defense.

The House of Lanward is well known throughout Esperia. Lucius, the eldest son of the house, bears the burden of generations of expectation. Lucius began learning how to fight with a sword from early childhood and became an adept fighter by the time he reached adolescence. If it weren't for his young age, he almost certainly would have been sent off to war. A person with his skills is greatly sought after for the battlefield. But Lucius was an inherently kind boy. He would seldom join the hunts, and even on the rare occasion that he had to, he never fired an arrow at any prey. While sparring with his peers, Lucius would often feign defeat if he thought he was going to hurt an opponent. Lucius thinks of life as something to be cherished and protected. He had always preferred the temple, with its candles and quiet hymns, to playing with the other children.

It was always Lucius' wish to become a medic, but not surprisingly his parents disagreed with this notion. House Lanward had a proud martial history. As member of and heir to the house, Lucius would continue the traditions of his forebears. At the age of 15, he was sent to join the King's forces and was given a place in the cavalry, as befit his station.

Although he fought valiantly, his comrades were often confounded by Lucius' actions. He would often tend to the wounded before the fighting had fully stopped, occasionally even dressing the wounds of injured enemies. His odd behavior led to him becoming estranged from his peers, but this didn't present him with any real difficulty. Between the fighting, he would divide his time between the temple and the stables, praying to Dura and tending to the injured horses.

One evening he went to tend to the horses as usual, only to find them all laid about on the floor, blanketed in blood. Standing among the carcasses was one of his comrades. He looked at Lucius with glee, thoroughly enjoying the scene he had created, the trouble he'd caused. "These horses are no use to us anymore, they can't ride again. They're useless, just like certain others amongst us" The man sneered and looked Lucius in the eye as he spoke. Lucius' unorthodox combat practices had made him some dire enemies among the cavalrymen. He stayed in the stables that night, and never returned to camp again.

It was several months later, on one dark autumn day that the Maulers decided to raid the lands of men. This sudden attack caught the cavalry off guard. It was simple butchery, and they were dealt a crushing blow. Unable to form an effective battle formation, their ranks were broken time and time again until they were finally routed. Left strewn across the battlefield were the dead and injured. The injured were shown no mercy and were hastily dealt their final blows by the vicious Maulers. The men were in a full retreat when a luminous bright light shone down upon the battlefield. At the center of this light, a figure stood straight, his white armor glimmering. An instant later, hundreds of thundering war horses charged forth towards the battlefield. The sight of Lucius standing there in his brilliance rekindled the courage in his former comrades to return to the field of battle and push the Maulers back from whence they came.

"I stand for the light!"

A blessed shield that remains unscathed after a hundred battles.

Enemy heroes have their energy recovery effects reduced by 30% for 4 seconds when they are struck by the ability “Divine Strike” or if a normal attack becomes a critical strike. 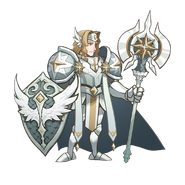