Khasos is a strength-based warrior hero of the Mauler faction who can fight at melee and ranged. He has a good support skill which adds sustain to all allied members of the team.

Khasos' ultimate ability "Spinning Obliteration" targets the side of the battlefield with the most enemies where Khasos will proceed to throw 5 damage-dealing war axes.

This is an unforgiving world. Might makes right, the ends justify the means, and the only sin is defeat. Khasos did not seem to be cut out for such a place. He was small from birth and provided an easy target among the other Mauler youth. He was viewed with disdain and treated with animosity and never aspired to anything beyond survival and a modicum of comfort.

Though Maulers are disgusted by weakness, they are a pragmatic people, and don't let anything go to waste. The runts and leftovers are not honored or even respected in their society, but they still have their place. Anywhere there is menial labor to be done, they will be found working, slaves to the whims of their masters. They are assigned tasks deigned degrading by the warrior caste that rules the Mauler tribes, such as tending livestock or acting as servants. Khasos' primary responsibility was to shepherd a minor chieftain's flock, and in the eyes of many, his position elevated him to a status not much higher than the animals he looked after.

The day of the storm started like any other. Khasos rose with the sun and watched the animals from a nearby hillside. The clouds approached so rapidly that there was no time to get the beasts to shelter before the wind and rain hit them, with flashes of lightning and peals of thunder scattering them in every direction. In the onslaught, there was no chance for Khasos to gather the flock.

The young Mauler was beset with a crushing dread. His master was cruel, and would not forgive this. Rather than face a brutal execution, he would die in the way that is the right of any Mauler, no matter their station in life- by combat. Khasos knew this was to be his last act, and he felt something welling up in him that he'd never experienced before. Defiance. He challenged his master directly, demanding that he face him in a trial of life and death. When he heard the challenge, the master roared laughter to the sky. His warriors and even a few of their servants followed suit, either out of amusement or an eagerness to demonstrate their solidarity with the chieftain. Khasos stood firm. If he had to die, it would be dignified.

The master accepted the challenge, loudly boasting that it would be an amusing way to pass a couple of moments. He shouted for a horn of ale, and after downing it, shouted for another. He joked and played games with his warriors, ignoring Khasos as he slammed back draught after draught. By the time the duel began, he was sopping drunk. He stumbled onto the dueling ground, dragging his sword along through the dirt and trying to focus on his opponent by closing one eye tightly and staring with the other. He swung, still an arm's length too far away to make contact, before orienting himself and clumsily leaping forward with the blade raised high.

Khasos wasn't an experienced fighter, but he'd always been quick and agile. Before the chieftain could regain his balance, there was an axe lodged in his neck. He stood in disbelief for a moment before falling, dead. Watching from afar was Brutus, the leader of the Mauler tribes. This servant had potential. With the right training, and someone to show him how to use his stature to his advantage, he would become an asset to his people. He would become something far greater than a shepherd.

“Your destiny isn't truly yours until you seize it.”

The axes used by Khasos to fell a Mauler chieftain in ritual combat. 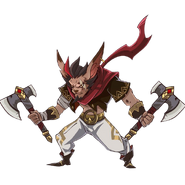 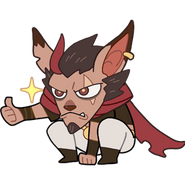 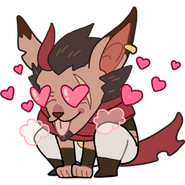 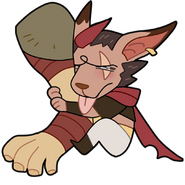