Kane is the commander of the Hypogean army who serves as the final boss of the hardmode labyrinth in the Champions of Esperia event. He also serves as the boss of both campaign stage 1-12 and the Rancid Forest Peaks of Time level; as well as the mini-boss for The Twisted Realm.

Kane attacks the player's team with up to 3 fiery swords and commands his pet dragon to join in the attack. He's able to hone in on the opponent who has dealt the most amount of damage and subsequently annihilate them.

In the lore for the Peaks stage, The Burning Woods, an altar that once held Kane is mentioned.

"This area of woods is said to be scattered with several ancient altars, each altar is said to embody a different type of elemental magic, whether or not the magic within these altars is good or evil is anybodies guess. As a way of maintaining balance between the elements found in this mystical land, ancient Wilder sages created an altar that is now home to a powerful water elemental."

The Burning Woods contain an altar where Seirus sleeps, adjacent to an altar containing Kane. There are several other altars that set the woods on fire when destroyed.

You gave me your word
I gave you my child
The most beautiful girl in all the world.

Your thirst for power destroyed
my world
Let my grief enfold thee
For now you shall cower.

The princess is gone. The birds of
dawn
Oh how they do scorn.

The king was no more
The blade of fire pierced his heart
A feast for the crows before they
depart.

The knight had slain his king
Evil had taken hold
Oh what a fearful sight to behold.

- The Oath Breaker by Angelo,
Song of Dawn.

"The infernal knight that slayed his king. He knows nothing but bitterness and hatred."

Kane appears as a mini boss in this guild event. He has lead the Hypogeans to the malevolent plane known as "The Twisted Realm" in order to project hellish intentions onto the unblemished minds of the Esperian denizens. He is challenged by the player's team of heroes, who have been called upon by Tasi Dreamhopper to neutralize the threat. Defeating Kane grants the player Twisted Essence.

In this event, Kane takes on the role of final boss by assembling a team of enemies for players to fight at the end of each floor of the hardmode labyrinth. Defeating his team rewards the player with Heroic Merits, a currency that can be spent on various rewards. Defeating Kane also provides the opportunity to obtain Hero's Essence which can be used to level up heroes.

Rancid Forest reeks with a thick stench. It is the place where the followers of the demon occult gather. Their ruler Kane can be found deep within the forest. To get a glimpse of Kane, they must offer up sacrifices to their cruel ruler on alters scattered throughout the forest which opens the passage to his throne. His devout followers within the dark shadows of the forest hidden beneath thick vegetation. They await those who dare to come looking for Kane and threaten his rule.

Hogan and his men have fought long and hard to breach the city walls, however they now face Kane, commander of the Hypogean legions. The odds are stacked against the valiant heroes, but Hogan is duty-bound and he must reclaim the city, no matter the cost.

In the Abyssal Expedition event, Kane is located in a Destroyed City between the Scarred Ruins and the Forsaken Territories. In order to progress, the Militia needs to defeat the bosses. 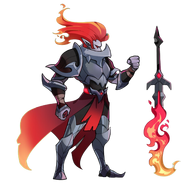 Kane featured in the background of the story trailer.

Kane's depiction in the story trailer.
Community content is available under CC-BY-SA unless otherwise noted.
Advertisement