Izold is a durable, strength-based warrior of the Graveborn faction. He utilizes chemicals to increase his health and haste as well as damage enemies. His needle strike ability stuns enemies.

Izold's ultimate ability "Toxic Transfusion" allows him to boost his own health, haste, and attack ratings.

Izold was never the most talented warrior. His success was a result of interminable effort and unimaginable endurance. Fighting battles was the most important thing in his life, and the battlefield was where he could prove his value. He saw no strength in himself besides his battle skills.

When he was brutally injured during a fight, Izold felt he had lost everything. The only glimmer of hope that kept him alive was the chance to find a way back to the battlefield. In search of such a chance, Izold ventured into Bantus on his own-- the second human being that ever dared to do so (the first was Silas).

To some extent, Izold and Silas had much in common. They cared little about what others thought or did, and were willing to do anything to achieve their goals. Silas knew that too well, and tempted Izold with an offer too good to turn down: a brand new body with no limits which knew no pain or exhaustion. Hearing this offer, Izold realized what a maniac Silas was, and just how much the two of them were alike. He was willing to trust Silas with his own body and become a test subject.

Thus, a wounded warrior and a self-destructing metallurgist teamed up. After their mad experiments, one became an undying killing machine, and the other a maker of such machines.[1]

Izold was once a decorated soldier of the Lightbearers. He rose quickly through the ranks thanks to his ferocious fighting style and dogged determination on the battlefield. He had fought every kind of enemy in every kind of engagement, from massive clashes at dawn in cleared fields to nighttime, to ambushes in lonely mountain passes. His victories were too many for him to keep track of without his various medals and ribbons commemorating different feats of heroism in service to the kingdom. Serving just as well as reminders were his many scars. Every slashing mark had a puncture wound nearby to keep it company, and each one had a story. Izold was tough, and had survived wounds that would have killed most men in short order, but even he had his limits. In an engagement wherein the Lightbearers found themselves helplessly outnumbered, Izold fell for what he thought would be the last time. When he was carted off the battlefield, the healers were baffled at how he still drew breath after leaving so much blood in the soil.

Izold was a valued soldier and had saved a large sum of money from his pay and bonuses. He received the best treatment available from the most skilled surgeons in the realm as well as the divine healing light of the clerics. Still, there was only so much they could do. He would never fight again. At this point, he would be more liability than an asset. No longer would he march proudly with his brothers in arms through a liberated city. No longer would he bask in the cheers, the flowers raining down from balconies brushing softly against his gleaming armor. The nights around the campfires, ale flowing freely as the men sang in joy for the day's victory, were likewise only to be a memory now.

He took to the bottle, quickly squandering what remained of his savings and gradually transitioning from beloved hero to belligerent drunk. The drinks that had been given freely and with good cheer were now handed over begrudgingly. He hated the sight of himself. Changed. Broken. When he finally stopped coming around his usual haunts- the seedier inns and pubs- it was assumed he had suffered the usual drunkard's fate. A few people asked after him, but the only response they ever received was to go check the alleys if they wanted to find Izold or what was left of him.

As it happened, he had taken a very different path. Summoning the last of his will, he packed what few necessities he owned and hobbled out of the city. He knew that he was headed toward his death, but if he had to go, it wouldn't be in a drunken stupor behind a pub somewhere. He would die with the wide world ahead of him. He set off on the long journey to the Bantus wastelands that surround King's Manse, a dark place inhabited by foul creatures, the former seat of the Fallen King.
Upon crossing into the foreboding realm, he could feel the eyes on him. He would have one more good and noble fight, and then he could rest at last. If nothing else he would regain some small spark of dignity in death. It was much to his surprise when he was approached peacefully by a twisted creature that offered him a deal. He could regain his former strength and glory, but he would serve a different master. Izold thought of the past years of his life. The scowls, the derision, the pain, and his mind was made up. The creature led him to its master. Izold was bewildered at the strangeness of the place the man kept. Arrays of peculiar devices circled a heavy operating table and vats of glowing serums lined the walls. Still, he would not balk.

When Izold awakened, he didn't recognize the body he was in as his own. He lashed out in fear and was shocked at the strength he now possessed, perhaps even greater than before. He examined his body. Stitches and rivets connected limbs he had never seen. Pieces of him had been melded with armor plating or replaced entirely by hard steel. He was told by Silas, his savior, that the chemical mixture stored in his vials would increase his speed and fury in battle. For the first time in years, Izold felt joy. For the first time in years, he felt gratitude. 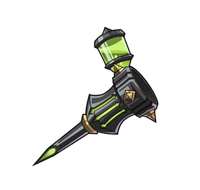 A weapon built with the prime purpose of impaling its victims, it contains a powerful chemical agent that is capable of turning the gentlest of souls into unbridled killing machines.

When Izold uses “Toxic Transfusion” he will also receive the effects of his “Hypodermic Healing” ability. 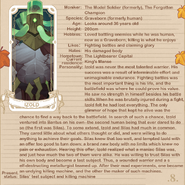 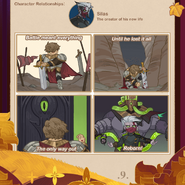 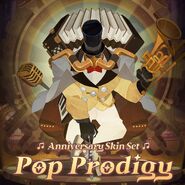 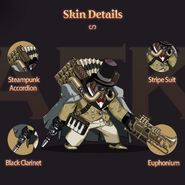 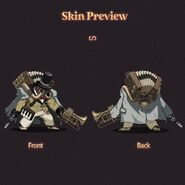 Esperia Shorts- Out of Your Grasp - AFK Arena