Island of Solitude is a limited event ranging from August 4, 2021 - August 17, 2021. In this event, the heroes will come to a remote island and start a survival challenge. Players need to manage their heroes' Stamina for fighting, fishing, farming, ship repair, and exploration. As the number of days survived increases, the hero camp will also welcome a number of uninvited guests from whom they will get rewards for fighting.

There is 1 crystal chest and 83 gold chests to collect.

A peculiar and ghastly ocean anomaly has caused the valiant heroes to become stranded upon the Island of Solitude.

With no way of contacting civilization, the heroes find themselves on a peculiar island all alone, or so they think. A shortage of supplies, hidden enemies, and disaster after disaster striking the heroes has left them all at their wits' end. The heroes know that if they are to survive, they must cultivate fruit and catch fish, these things are paramount to survival. Only by having the bare necessities of survival, can they then turn their focus towards repairing their wrecked ship and returning home.

However, a plot is brewing, and the hero's shall be tested in ways they never thought possible...

Heroes will burn stamina as they complete activities on the island. Each hero will start at 20 stamina, and can recover 20 stamina per day.

The amount of stamina is fixed per slot, meaning that you can freely switch a hero into a different slot in order for them to gain the stamina of that slot. For example, a Nemora in a slot with 12 stamina can be swapped with a Belinda in a slot with 20 stamina. At the end of the swap, Nemora will have 20 stamina while Belinda will have 12. 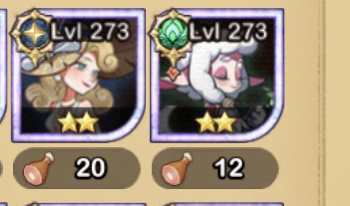 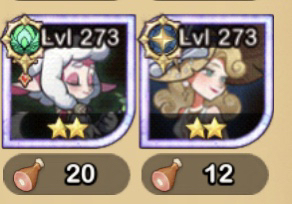 This is an effective manner of getting more use out of specific heroes.

The table below details how much stamina will be burnt per each activity:

Bottles will wash up near the shore daily for players to collect. In doing so, the player will be able to claim a small amount of supplies and read island logs.

The table below details some of the floating bottles:

The fishing mechanic allows players to catch fish, which will provide heroes with a factional buff for boss battles. The buff received depends on the fish caught, with different heroes being able to catch different fish. Players can collect 1 fish per 8 hours.

The table below details the fish available:

The farming mechanic is similar to fishing, however the buffs that fruits provide is based on Hero Types. The buff received depends on the fruit, with different heroes being able to produce different fruit. With 4 different patches to farm in, players can collect 4 fruit per 8 hours.

The table below details the fruit available:

Players can repair their ship each day to slowly unlock rewards. These rewards are based on repair progress. Roughly 8 days are required to reach 100% progression and collect all the rewards.

The table below details all rewards and their requirements:

Distant chests can be collected daily next to the ship. There are 7 in total.

Players can access a minimap in order to view specifically marked. These include the farming area, fishing area, boss camps, hero camp, treasure locations, and the player's current location on the map. Tapping anywhere on the minimap will bring the player to the location to scope it out before battling their way there.

This is a boss in the event. After 30 seconds of battle, enemies enter a state of despair and summon forth the God of Death who slays 1 allied hero. Players can use fish and fruits for buffs during battle.

This is a boss in the event. Players can use fish and fruits for buffs during battle.

This is a boss in the event. During battle, allies are affected by a poisonous mist which causes them to lose 3% of their max health every second, but will not result in their deaths. Players can use fish and fruits for buffs during battle.

This is the final boss of the event. At the start of battle, frontline allied heroes become entranced for 60 seconds. Players can use fish and fruits for buffs during battle.

The guild member with the highest Island of Solitude rank will win rewards for their guild.

​Reward requirements are as follows:

Found within the Island of Solitude event, used to unlock Island Survival rewards.

The table below details all of the quests:

The quantity/variety of these rewards can be increased by purchasing Island Survival for $14.99 USD, granting the player Elemental Cores, Elemental Shards, Shipwreck Goods Chests, and 980 VIP points; in addition to the aforementioned rewards.

Our tale begins with an expedition. Heroes from all corners of the world banded together to explore a land risen from the abyss...

Unbeknownst to our adventurers, the seeds of failure had already been sown. One amongst them was a greater threat than any could've known...

A malice widened an already deepening rift between the heroes. With their ship destroyed, a lost island was their only hope. But the real test has just begun.

Solise: ... What is this place? What happened?

Gorvo: We were shipwrecked. This remote island is our new home for now.

Belinda: The hull is ruined, there's no way we could piece this together and get back out to sea.

Belinda: ...Only by repairing the ship's hull can we guarantee everyone's safety.

Lucius: I used some of the decking from the wreckage to build a simple camp. This is where everyone will stay, it'll be easier to assign tasks to everyone this way.

Lucius: It'll take some time to repair the ship. The anomaly at sea doesn't appear to be subsiding. If we want to survive, we'd better cultivate our own food.

Solise: There are all sorts of plants on the island, I'm sure we can find some fruits.

Vurk: That looks like small bottles floating in the ocean, they seem to contain supplies.

Belinda: A drifting bottle. People would put messages in these and cast them out to sea. I've conveniently just picked up a pen and paper from the wreckage, perhaps we can use our own drifting bottle to send word for help?

Vurk: It's likely that the bottles will just wash back up on this shore again.

Solise: Look! A chest, floating in the sea!

Gorvo: It must have been on of the chests in the ship's cabin. Let's open it and see what's inside.

Solise: There seems to be more chests out at sea.

Gorvo: I can swim over and investigate, they probably have much-needed supplies inside.

Vurk: I can't live on leaves! I need some meat, too!

Antandra: Perhaps we can try our hand at fishing, that'll give us strength!

Vurk: What's with all the vines on this stupid island?! Setting traps is such a pain!

Antandra: We need to clear these vines to explore more of the island.

Seirus: What's the matter Gorvo, are you so surprised?

Gorvo: My dear friend, why are you on this island? Was it you who sunk the ship?

Arthur: This is the cause of all our problems. The mysterious sea anomaly and the in-fighting among ourselves. This is where it ends.

Arthur: We can be certain of one thing, our enemy has the power to impersonate people. He used the method to trick and deceive us, with the hopes of us turning on each other.

Belinda Two: My dear Lucius, do you have the heart to harm me?

Solise: So, what do you think of that huh? How's my skill?

Vurk: Solise dared put poison in the food? Does she have a death wish?

Belinda: Don't do anything rash. The enemy has the power to shapeshift, it's trying to turn us against on another.

Vurk: How do I know you're not the shapeshifter?

Mehira: I let you. I was getting bored of you all anyway. Oh how easily you are all provoked, how eager you are to indulge yourselves. Pathetic. Although you still hadn't fully given into your vices, you made me more powerful than I could have imagined.

"An exciting voyage into the unknown, a thrilling expedition. At least, it should’ve been.

But we found ourselves shipwrecked, stranded on a remote island.

A Hypogean is among us.

It has cleverly masked its identity, disguised as one of us.

It messes with our minds, corrupts our thoughts, leading us to our destruction.

All trust is gone, suspicion is rife.

Baseless accusations are at every turn.

Now, a choice must be made.

I’ve placed all hope in you.