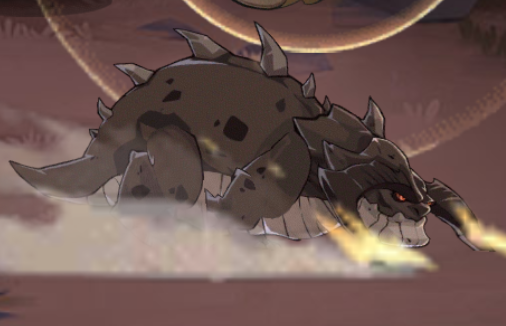 Iron-jaw beasts, commonly referred to as Iron-jaws, are a species of omnivorous, dinosaur-like animal that live predominantly in the Scorched Expanse, immediately recognizable by their naturally-armored jaws. They are domesticated for use as battle mounts, primarily by Maulers, but the Elite-tier Bounty Board mission "Taming the Beast" implies that Lightbearers have also begun training them. True to their name, they're exceptionally durable, and when tamed, are known for their power in battle and loyalty as companions.

They usually travel in packs, but this can backfire when it comes to competing over prey, which can result in their injuring each other too heavily to hunt, leading to certain death by starvation if nobody intervenes.

They are sometimes hunted for supplies, as evidenced by Skreg initially planning to kill the injured beast for food before deciding otherwise, along with Drez crafting his weapon out of an Iron-jaw's horn, but they usually require more than one person to subdue.

Despite their usefulness, an Iron-jaw is implied to be very difficult to care for. Their dietary needs (described as astounding in the Chinese version) are overwhelming enough for Skreg to routinely need to request help gathering food for Savagehorn on the Bounty Board in the Legendary-tier quest "Hungry Beast", and according to Vurk during "Voyage of Wonders: The Deathly Marshlands", their smell can be very unpleasant.