Rogue of the Forest

Ira is an agility-based marksman hero of the Wilders faction who is good at dealing sustained damage while rendering her attacker helpless from heals through a bleed debuff. She can apply a movement debuff on enemies using her ice arrows.

Ira's ultimate ability "Hail of Arrows" enables her to rain a barrage of arrows upon her enemies.

Shadow Hunter. The Whispering Kill. Black Cloak. All titles spoken in fearful tones, all referring to the same person. To the other Wilders, she is simply Ira of the Dusk Watch. To her comrades in the patrol, she is Ira the Rogue. Despite her adornment of so many names, she is singular in purpose, and utterly committed to her cause. Ira was handpicked from among hundreds of war-riors to serve with the Dusk Watch as the Wilders' first line of defense, those who would preserve not only their pristine society, but every inch of the forest which they call their home. The Dusk Watch consists of those deemed most capable of dealing with the new (or old, depending on one's point of view) threat which now encroaches on the world, on the verge of despoiling all things green and pure.

Wilders, and the Dusk Watch in particular, are more in touch with the natural world than the other, cruder civilizations with whom they share the continent. They do not bumble about the world, searching for their way, searching for meaning. They are one with the world and the world's spirit. They understand their place in the natural cycle of things and are thus afforded certain instincts and insights that grant them what many see as a kind of supernat-ural sense of premonition when it comes to Esperia's occasional cataclysms and upheavals. It is thus that they know already of the failure of The Barred Gate, and the incursions being made by the Hypogean horde which move ever closer to the verdant paradise no Wilder could long live without. It is fortunate that the Wilders have those such as Ira. Her patience, her callousness and her bow ensure that the forest and its inhabitants never need worry that they may be in danger. So long as The Dusk Watch slips along the dappled shadows of the tree line, any potential men-ace that makes a wrong step will wet the tangled roots of the forest floor with blood.

Ira is known to not only accurately predict the enemy's movements, but also to lie in wait for hours or days if need be. She always places the perfect shot. Untraceable, unexpected, and invariably fatal. Through a single well-placed arrow and the subsequent indignant death of its target, she can make enemy scouting parties scatter in a confused terror. Even the most hardened and cruel of the Hypogean demons will allow a look, a flicker of doubt betraying fear, to cross their twisted visages at the mention of her name. She wears the dark cloak symbolizing her people, and it is forever her people for whom she fights and performs the darkest of deeds. Even mon-sters have nightmares. This nightmare's name is Ira.

“Take a step closer to the tree's edge. Only one of us knows it will be your last.” 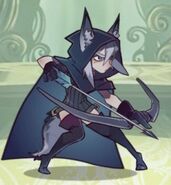 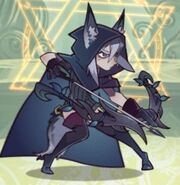 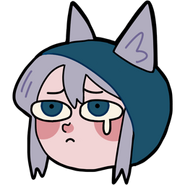 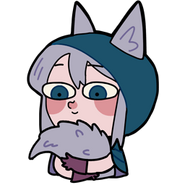 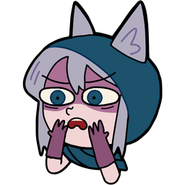 Retrieved from "https://afk-arena.fandom.com/wiki/Ira?oldid=7658"
Community content is available under CC-BY-SA unless otherwise noted.