Knight of the Kingdom

"You dare stand against me?"

Hogan is a strength-based tank hero of the Lightbearer faction with a variety of Crowd control skills. He is able to keep the enemy in front of him busy and interrupt them.

Nobody would've thought that Hogan's original motive for joining Esperia's fourth frontier expeditionary regiment was to fill his belly. Unbeknownst to him, he would fall in love with military life. Always on the move, fighting twenty years across every kind of environment in campaigns both big and small. Twenty years of his life had flickered by in the blink of an eye and what did he have to show for it? The rank of Master Sergeant, that was all. An overabundance of military experience, surely, but how could he put that to good use?

Twenty years he'd been waiting. Now a man of forty, wisps of grey had begun to appear here and there in his beard. The commanding officer of the fourth regiment had retired when his health began to fail. His own decades of hardship had finally worn him down and he could no longer lead as he once had. Surely now Hogan's chance to shine had finally arrived. He was the most suitable heir to this gory throne. No man in the regiment could best him in tactics or strategy. Merit, however, does not always garner reward, and the commander's replacement was a young noble hailing from a military family. Hogan was as accustomed to obeying orders as giving them and could do nothing but accept this unfortunate turn of events.

Those accursed maulers were yet again threatening the Kingdom's sovereign land. It was the frontier regiment's Light-given duty to uphold and protect the King's land, no matter how desolate and far away it may be. Those tribal folk were no match for the King's steel, or the regimented, refined, military machine which wielded it. The Maulers had retreated from the most recent encounter. Hogan had known better than to give chase, but it was his duty to heed the orders of his superior. His commanding officer had bellowed “Give chase! Run them down! Press the advantage!” It was surely a trap and an obvious one at that. Hogan could feel it and judging by the looks of the more experienced men, he wasn't the only one.

Now they were here, surrounded and outnumbered by these despicable beasts. He'd been right all along. What else could it have been than an ambush? His comrades were like lambs to the slaughter. A sacrifice to the wolves. An offering to the gods. The young nobleman would pay a heavy price for his arrogance, a price that would be paid with his life – killed valiantly in the service of his King. This meant Hogan, as the second in command, would have to take on the title of master sergeant after all. That was a matter for later though. Now he had to get the regiment out of this alive.

Brute force? No, that wouldn't work. They were outnumbered. The situation called for both brains and brawn. The topography of the land favored the defenders and these dumb brutes were always easily distracted and easily deceived. Hogan had his men split into two forces. The bulk of his forces would remain in line while he and a handful of his best men would slip behind the ravine which cut through the mountainsides that they'd found themselves sandwiched between. They slipped around the mountainside to flank the Maulers from the west. They hit from this unexpected quarter and unleashed hell. Hogan gave the signal and in pincer-like fashion the regiment pierced through the Mauler's ranks. Hogan had pinpointed the enemies' general and in the chaos of battle, managed a precision strike. Seeing their general fall in the frenzy took the fight out of them like nothing else could have. They were routed. He'd done it. He'd clenched victory from the jaws of defeat.

Hogan was later bestowed the rank of Commander of the Frontiers by the King himself. Since that day the children of Esperia would sing songs of praise about him. He'd become a part of history. He was henceforth known as “The Knight of the Kingdom”.

Hogan went on to create an alliance with the Dwarves that would ensure the safety of Esperia, fighting off the hordes which threatened their very way of life. The people knew that as long as Hogan was out there, the Kingdom of Esperia would never fall.

"Protect the weak and uphold justice, no matter the cost!" 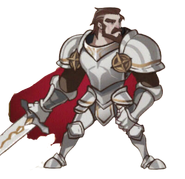 Hogan's Model prior to Legendary Tier. 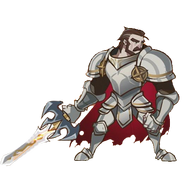