The Imperial Palace of the Lightbearers

Gwyneth is a strength-based ranger of the Lightbearer faction that makes use of attribute bonuses when left unhindered. She can reduce enemy accuracy and deal them burn damage. She is one of the Lightbearer's most viable damage dealers, allowing her to pump out damage and crowd control enemies.

Gwyneth's ultimate ability "Divine Arrow" rains a barrage of arrows upon her enemies to reduce both their health and accuracy, granted that the enemy side of the battlefield isn't empty.

Gwyneth has long since been aware of the fact that she was adopted. Though her stepfather gave her all the love and care in the world, the lack of any blood relations still causes occasional insecurities. As a result, Gwyneth has always been very strict with herself to make sure she does not let others down.

Growing up alongside princesses of the royal family, Gwyneth turned out as a fair, elegant lady who possesses confidence and dignity, but is never arrogant. Her stepfather sets a great example for her about being a loyal, persistent, and determined person. To Princess Peggy, she is a trusted friend and a stern teacher during archery training.

Loved by the people around her, Gwyneth has grown up to be a soldier who is strong enough to protect the Princess, serve the King, and guard the Kingdom.[1]

Gwyneth is the adopted daughter of Hendrik, captain of the royal guard. Despite having no blood relation to the famously strong soldier, she does possess the same incredible might. A point at which the two diverge is that where her adoptive father avoids bloodshed wherever possible, favoring defensive combat techniques, Gwyneth has no such reservations.

Being the daughter of someone so close to the King, Gwyneth grew up alongside the sons and daughters of the nobility. While most of the privileged youngsters treated martial instruction as an amusing diversion, strolling out to the range to loose a few arrows in friendly competition, Gwyneth took to it wholeheartedly. She saw the fulfillment her father got from his service to the crown and wanted the same thing. Still, she knew that despite his position, she'd have little chance of making the cut any time soon. It was unheard of for someone untested in battle to be assigned something as important as personally defending the monarch. And besides, she was just a kid.

Her aggressive nature and singular focus made her intimidating to the other children, so Gwyneth would typically seek the company of adults. Where the others made friends with peers and pets, Gwyneth befriended the palace guards and grizzled veterans of the king's army. They were a lot more fun than the other kids, with their stories of battles and advice on fighting. In time, she began to accompany her father and his comrades on the outings he deemed safe. She loved riding alongside the soldiers, listening in on their banter and recollections. There were always plenty of laughs to go around, and sometimes a bit of excitement at the hint of danger. It was on an excursion much like this that Gwyneth was forced to prove herself.

There was a hunt near the castle grounds. The woods here were well patrolled and no bandit would ever dream of attempting anything so close to the residence of the king himself. Their hunting party was in good spirits, not even bothering to be stealthy. The king was drawing heavily from his skin of wine and requesting songs from the guardsmen in turn. A hunt was, after all, as good an excuse to go for a ride as any. As they entered a clearing, they inadvertently disturbed a rock triton. The massive, dragon-like beasts were never seen so close to the castle, and the hunting party was taken completely off guard. Before they could register what was happening, one guardsman lay crushed under its massive jaw, his breastplate punctured and crumbled like parchment. Hendrik began shouting orders. Soldiers took up defensive positions around the king and others advanced on the beast. Their weapons were useless against its incredibly tough scales, and despite Hendrik's best efforts, men were falling to the creature.

A soldier in the back was fumbling with a portable ballista. He struggled to wind it up, this usually being a two-man job. Gwyneth dropped nimbly from her mount and pushed the young soldier aside. With a few quick motions, she had readied the weapon. The triton roared, exposing a deep red throat. With a heavy thrum, the arm-length bolt flew between the thing's teeth, the heavy iron head bursting from the back of its neck in a spray of gore. It fell among the dead and injured soldiers as the others turned to locate the source of their salvation.

The king had known that Gwyneth aspired to the royal guard, but had never taken her seriously. Seeing the calm efficiency with which she had dispatched the monster, he changed his mind. "Hendrik!" He shouted. "Your daughter works with you now."

"I've killed tougher stuff than you." 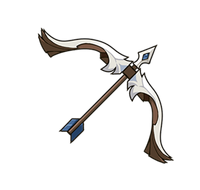 As tall as a person, this longbow requires great strength and accuracy to be used efficiently. The bow gets its name due to the high velocity of its arrows, which are said to be as fast as a shooting star.

Attack Rating is raised to 10% when in close proximity to allied heroes.

To view the transcribed version of this guide, see Gwyneth/Usage Guide. 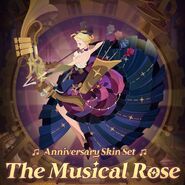 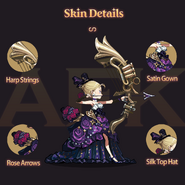 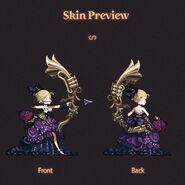