Guild Hunting, Special Events, and Hard Mode Wrizz in Arcane Labyrinth
Guild Coins are a currency in AFK Arena. These are coins that can be earned in Team Hunting or as a possible reward in the Wrizz battle in Arcane Labyrinth. They can be spent in the Guild Store to buy gear or mythic buffs. Guild coins are bound to each player and will not be recalled when leaving a guild.

Players can hunt Wrizz daily and Soren (with 9000 activity points) in order to obtain guild coins. With participation in team hunting, players will earn rewards. The team hunt rewards will eventually arrive in the player's mail at the end of the events containing additional Gold and Guild Coins. 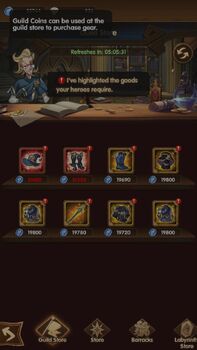 Saving guild coins can be a good way to obtain higher tier gear. Starting on Campaign stage 21-4, when the shop has been refreshed, players have an opportunity to buy Mythic T1 buffs and on Chapter 26, Mythic T2 buffs to strengthen mythic gears.

Guild Coins can be used at the guild store to purchase gear.