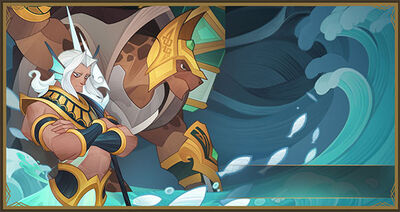 "Many great mysteries lie below."

Guardians of the Abyss are a union of Wilder heroes consisting of Seirus and Gorvo.

Of late, the abyss has called to me with increasing frequency. it tinges my dreams with shadow and tugs at the strings of my sanity. I feel its presence always and though it lie far away in this world, it stays close by in the realms of my psyche. It hungers and waits, and I fear it need not wait long. I thirsted for knowledge, and now that very knowledge is driving me to madness. I write this account in an attempt to convey what I have seen. Consider it a warning. I first heard the rumors of the ancient city of Bonapei in the forbidden library of my mentor, the illustrious adventurer Gretel Hawk. She was in possession of a great number of books, scrolls, and even a handful of stone tablets containing a cornucopia of forgotten knowledge and myths rooted somewhere through the mists of time in truth. To describe Hawk as a presence is an understatement. She radiated mirth and daring in equal measure, having the perspective of a woman who has seen near everything the world contains. It wasn't easy to excite either anger or unease from her, but on the night she found me reading from the weathered scroll by candlelight, I saw her despair.

The mere name, "Bonapei", seemed to drain the light from her eyes. Her features sagged and she bowed her head.

"This is something you don't wish to learn. There is a reason the things kept here are locked away. I pray you will heed this warning, but I know you will not."

She pulled the scroll gently from my hand and held it to the candle's flickering flame. She scrutinized me as it burned and then walked away in silence. I shrugged it off, telling myself that the old woman was overreacting. Either way, it was beyond question that I needed to know. Explorers are driven their whole lives by curiosity. It is our one true motivating force. It was this force that had compelled Hawk to sift through the sands and dig through the soil in every corner of the world, searching for those things which once were. It was this force that brought me to my doom. I scrambled for a quill and parchment and jotted down what I had read in the scroll from memory. I wish now that I hadn't so faithfully reproduced the information therein.

Months later, the merchant ship on which I had procured passage came into sight of land. I had been at sea for ages and was glad to see the smoke from cooking fires rising from near the shore. After being refused multiple times, I found a guide from among the native people. Most seemed extremely reluctant to even speak of my destination and would typically answer my question, "Bonapei?", with only a shake of the head before walking away. Even my guide made it abundantly clear that he would take me only to the cliffs from which we could view the city from a distance. He would not tread past this point.

After four days of difficult trekking through thick undergrowth, most of which allowed a line of sight seldom exceeding a few arm lengths, we were presented with a stunning vista. At the edge of the cliff, the lush vegetation thinned out and offered a view of the vast canopy. The guide pointed wordlessly to what I first mistook for a series of hills far away in the sea of green. They were no hills at all, but massive structures rising out of the jungle. It looked as if the stone was being pulled into the ground by the grasping foliage. I pushed my sudden unease to the back of my mind in favor of the excitement I felt at finally looking upon a city few in my land had ever heard of and fewer still believed to exist at all. Smiling toward my guide, I spoke the name of my downfall.

He remained expressionless, seeming to stare through me, and held out his hand for payment. The cliffs were treacherous and took more time to descend than I had expected, but two days after my guide's departure I knew I was getting close to the ruins. The occasional carved stones laying half buried in the forest floor became more frequent. As these marks of civilization increased in number, other things became rare. Most of the plants that had impeded our progress before the cliffs didn't grow here at all, and the calls of beast and bird had gone silent. The only life I could discern were the towering eons-old trees, choking vines, and various luminescent fungi.

Eventually I reached what had certainly once been a great and thriving society. The scale of the structures was well beyond those to which I was accustomed, and the stone was fitted so expertly in place that the centuries of neglect had made no change in their placement. The creeping vines ran along every one of the abandoned temples and shrines. After hours of exploration, I heard a distant roar breaking through the silence. Water. Ascending to the summit of one of the nearby temples, I was treated with an awe-inspiring view of the city. Everywhere through the treetops rose the upper sections of the ancient structures. The lines and angles were strange to me; an architectural style belonging to no society current or past of which I was aware. The roar of water emanated from a massive set of falls in what looked to be the city's center. A wide and sluggish river ran among several of the structures, creating artificial islands in the dark swirling flow. The river terminated in the falls that disappeared into a vast opening. Crumbled ruins rimmed the pit. The city hadn't been built around it.

That night, a fierce tremor awakened me from my sleep at the top of the temple. The steady and distant roar of the waterfall had changed in its constancy. I thought at first that the tremors in the earth had disturbed the course of the river and hurriedly grasped my spyglass with the Wilde-crystal lens that would allow me to see clearly in the dark. The only mercy in what followed was my distance from what I saw.

Giant tentacles, far thicker than the trunks of the oldest trees, rose writhing from the abyss. Their number was impossible to ascertain. There were seven, then three, then a hundred, and then two. They wrapped around the ruins circling the abyss like vast snakes, disgorging strange creatures of impossible shape which skittered and oozed into the night. A numbness began clouding my mind. I didn't comprehend what I was seeing, and still I don't.

Suddenly there was a piercing screech unlike any noise I have ever heard, and I saw one of the things go flying, crumpled, back into the abyss. There was a guttural bellow and the sounds of a heavy impact. I was snapped out of my fugue and searched frantically for the source of the new noises. There, among the ruins, was what appeared to be an unusual Wilder of hulking build. It resembled a turtle and carried a massive hammer. With each swing the creatures were cast broken back into the abyss. Through this carnage, the roar of the falls grew ever louder. The river had swelled and now swirled into the abyss from all sides. It seemed the entire city was flooding. A frothing wave moved down the river toward the falls, and at its crest I observed a figure hefting a shining trident. The figure crashed upon one of the tentacles, impaling it with bright steel. Another tremor shook through the jungle as the badly wounded thing retreated. The waters continued to rise and it was here that I lost consciousness, the enormity of what I had witnessed being too much for my mortal mind to bear.

I awakened on the deck of a ship. The crew eyed me warily and explained that I had been deposited there from a great spout of seawater. I believe they would have thrown me overboard had they not feared the repercussion from whatever force had delivered me to their vessel.

Now, back in my old home, I pen this account to warn you about what lies in that place. It has destroyed me already, and I believe it will return to destroy us all. Only the Wilder and the Elemental grant a glimmer of hope for our world.