Grezhul is a strength-based tank hero of the Graveborn faction who is able to summon minions for the allied team. He gives himself or an ally a shield which can soak damage. Once the shield is destroyed, nearby enemies will receive damage. He is also known for his passive buff which reduces all incoming magic damage for all allies.

As a child, Grezhul was sent away from his mother to join the palace, his heart full of trepidation and anxiety as he feared suffering bullying at the hands of the royal children. To Grezhul, Thoran seemed to be the father figure he had long yearned for, and as he grew older, he regarded Thoran a ruler and a father, but even more so, a lifelong mentor and someone to believe in. To ensure his life could be spent at the monarch's side, Grezhul trained in earnest, working his way to the foremost rank of the military.

Once he became Graveborn, all but his memories of staying by the King's side faded, and his desire to protect and serve the King became his only compulsion, unshakable even in death. Even in the face of chaotic eternity, protecting the King is Grezhul's only desire, it is all he wants.[1]

Gareth was a Praetorian- the highest order of commander in the realm of the old king. He was brought to the royal estate at a young age, growing alongside the members of the royal house, seeing the king nearly every day and learning from him. His charmed life, however, wasn't owed purely to the altruism of the royalty. Because he'd shown such a stunning aptitude for command and uncanny martial prowess at such an early age, his family had been requested to give him up for a royal wardship - a high honor for his kin.

Gareth grew into a man, and didn't disappoint. He improved ceaselessly and was naturally picked to join the King's praetorian guard. The guard were the best the realm had to offer. The most able in every aspect of military regimen, there was seemingly no threat that could equal them. There were always attempts on the king's life in those days, and these always failed. Gareth himself was responsible for thwarting many of these attacks, once deliberately taking a would-be assassin's arrow through the palm of his own hand to keep it from the king's heart. Pulling the shaft through the bloody wound, he chased down the archer, using that same arrow as a dagger to dispose of the assailant.

The Praetorian was always on the lookout for threats from outside, but he'd never imagined that the real danger may come from within. The king's younger brother, Edwin, yearned for power greater than his brother's, and would stop at nothing less than the throne itself. Gathering a group of conspirators and malcontents over several careful seasons, he staged a coup. At a banquet honoring the king's closest generals and advisors, Edwin stood, offering a toast.

On his final word the traitors, strategically placed about the room, put their knives through the backs and hearts of the guards and high officials of the old regime. Gareth was able to dispatch his attacker, but in a matter of moments was overrun, even his astounding swordsmanship inadequate against the current of blades. He fell, bleeding from a dozen deep wounds. As his vision faded, he saw the king dragged before Edwin, who nonchalantly sliced open the monarch's throat.

In the darkness of death, a voice called to Gareth. An offer. A soul for a life. A chance at revenge. There was no question as to the course of action. The voice named a name, and Gareth understood that this was now to be how he was known. Where Gareth had fallen, Grezhul rose to his feet. His hair now mimicked a pale flame, and his flesh was already drained of color.

Two of the traitors were ran through before anyone had noticed the ghastly new presence in the hall. Their brief shrieks drew the attention of the others, who looked just in time to see the skin and muscle slough from the bodies impaled on Grezhul's blades. They stood in shock as two gleaming white skeletons bent, picked up weapons, and started toward the now cowering usurpers. The hall became an abattoir and every footstep trailed blood.

Grezhul was seen leaving the hall with the body of the king over his shoulder, walking in the direction of an ancient cemetery.

“Duty does not end at death.”

A cruel pair of blades, especially effective against other undead.

Summons 1 skeletal warrior every 9 seconds behind the enemy closest to the edge of the battlefield while Grezhul is alive. 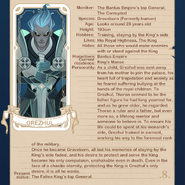 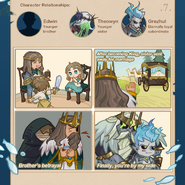 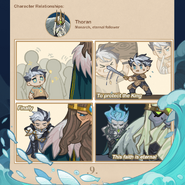