"I feel the beating heart of the world."

Granit is a strength-based tank hero of the Mauler faction. He uses a shield to protect himself and his allies, and has multiple ways of debuffing and controlling his enemies.

Whenever the dry sands of the Scorched Expanse swept over his rocky body, Granit would always think back to the squelching mud of the Dark Forest, but never once regretted leaving it.

When he first rumbled into existence, Granit adhered to the mission of all Elemental Guardians - to maintain nature's delicate elemental balance. Back then, Esperia's elements were far from tame, wild and unbridled, and disorderly the earth and rock often sunk the land into tumult.

When Granit stepped foot on it, the fractured land gradually healed, the folds of the mountains were flattened, and the restless ground was restored to peace. Compared to the wind's unpredictability and the fire's volatility, the earth is gentle. Once pacified, their balance cannot be unsettled so easily. In light of this maintained calm, Granit had no need to roam from place to place as the other elemental guardians did, so he accepted the Wilder's invitation to settle with them in the Dark Forest. Most of the time, he was a silent lump of stone, allowing forest's birds and wild rabbits to take rest on his still form.

Although the earth no longer rages, the strife above land is never-ending. War and slaughter have devastated Esperia, with blood soaking deep into the soil as the bones continue to pile up beneath the surface.

Being born of the land itself, Granit is inextricably linked to it, affected by its every aspect. Under the iron tramplings of wartime march, Granit's heart tremors and shakes. As the earth below his feet felt the beat of war drums, he too became more warlike, a reflection of the surge of rampant forces beneath the land's calm surface.

Granit did all he could to suppress this churning rage, carefully maintaining his own inner peace. Nature's elements were not yet imbalanced, but like a taut bowstring, it was only a matter of time before he snapped.

Khazard's betrayal was the final straw. Granit's rage overcame him, and in so doing the land fractured and rocks pierced through the soil, uprooting ancient trees, tossing them skyward. Encased in elemental dirt, the splintered trunks were forced up before crashing back to the ground, shattering them into dust.

The Wilder did not blame him, but when he met their gazes, full of trepidation and fear, he knew that an impenetrable barrier now existed between he and the forest. As long as war continued to rage on, the land cannot be truly at peace, and Granit's frenzy will continue to build, repression below the surface, until it ruptures again.

Granit decided to leave the Forest, heading deep into the desert where he could be in isolation. Here, he could vent his anger with impunity. The wind and sand would reshape the earth and allow Granit's anger to subside. Here, he found his own peace. He befriended the Maulers, and was welcomed by them. He used the power of earth and land to fight alongside his new companions, reserving his anger for any oncoming invaders.

Granit has never lost sight of his duty as Elemental Guardian, and whether in the Forest or the Desert, he is forever bound to the land beneath his feet. 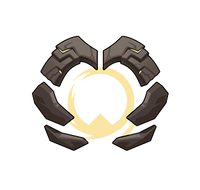 An energy core composed of desert sand that is the embodiment of Granit's inner restlessness. It possesses the power to petrify everything.

If there are still surviving allied heroes on the battlefield, they will additionally trigger the ability “Sand Vortex” upon Granit’s death. 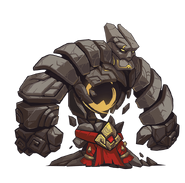 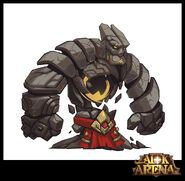