Gorvo is a strength-based robust tank hero of the Wilders faction who uses shields to bolster his allies. He also possesses many crowd control skills to impede enemy heroes. Gorvo can also stun his foes with forceful blows of his hammer.

Gorvo's ultimate ability "Battle Cry" allows him to taunt enemies, forcing them to attack him, whereupon he blocks their attacks with a powerful shield.

Where the forest’s roots dwindle into the salty sand of the Azure Cove lives a rather unusual Wilder. Where peacefulness and grace are the most common traits associated with the dwellers of the woodlands, Gorvo is a lumbering mountain of poor temperament quick to anger and action. Solitary and generally inhospitable, he seldom goes a whole season without demonstrating his strength by throwing some unwelcome visitor far into the waves of the cove. On the odd occasion that the unfortunate can’t swim, Gorvo will grumble some curses to himself and stride into the surf, swimming out to retrieve the intruder and bring them back to the shore. They never stay long after that, and Gorvo wouldn’t have it any other way.

The primary exception to this behaviour is Seirus, the elemental that inhabits the waters of the cove. The two learned to respect one another after a chance encounter led to a scrap that lasted for hours on end. Finding themselves well-matched, they began to meet on occasion to spar in the seafoam. Though neither would admit it, they enjoy one another’s company enough to think of the other as a friend. They can sometimes be seen together patrolling the beaches, keeping a watchful eye over their domain.

Gorvo may be rather light in the friendship department, but nobody has any doubt about his allegiance to the forest and the Wilders. His unpleasant disposition remained unchanged when the Hypogeans arrived in his lands, and his strength and size serve him well in the fight against the invaders. An immovable object of swirling fury in combat, he serves as an invaluable tool for his people. The gigantic hammer he carries is capable of crushing even the toughest of demons into sludge or sending them flying, shattered, meters away. His shell allows him to focus on his attacks, as no weapon the enemy possesses is capable of piercing it. There are few things Gorvo enjoys more than the thrill of real combat, and he feels something close to joy when he spots a demonic incursion.

The ocean, tranquil though it may seem, holds many secrets. With the resurgence of the Hypogean menace, there is no telling what horrors may come up from the deep. Gorvo has not failed to notice the anxiety Seirus has begun to feel, but no matter what the threats may be, Gorvo is ready to meet it. Hammer in hand, he stands and watches the waves.

Made from an incredibly hard substance, this hammer can bring down a fortress.

Increases the efficacy of all shields by 25%. 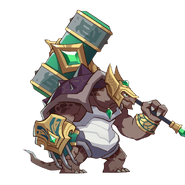