"You are either brave or stupid to face me."

Golus is a durable strength-based tank hero of the Maulers faction who can decrease any incoming damage significantly so long as he is being attacked at low health. He can keep melee heroes occupied by stunning nearby enemy heroes. He can also knock back enemy heroes and destroy their formation.

Golus' ultimate ability "Collision" damages and stuns the enemy in front of him.

Centaurs possess an unmatched stamina and willpower. Unsurprisingly, they are utilized by the warrior bands of the Maulers as a sort of natural cavalry. These creatures are ideal raiders, able to run day and night, striking targets from totally unexpected quarters. Their explosive power is remarkable, and they make for a truly fearsome foe to meet head on. The elite cavalry group, the “Raging Hooves” is one of the most feared and respected, in part because one of their number has never suffered a defeat.

Golus is the captain of the raging hooves. He calls the booming charges that sound like a thunderstorm. He leads from the front, and is always the first into the fray, smashing against lines of enemies already demoralized from the terrible rumbling of the raging hooves' advance. His unit regard him with the utmost respect. He risks life and limb alongside those following him, and would never give an order he himself wouldn't be willing to carry out. More than this, though, is a sense of gratitude. It was Golus who brought the raging hooves where they are today. Their respected position among the Mauler tribes isn't something they've long been accustomed to.

In Mauler society, the rules of nature are the law. The weak are preyed on by the strong, and might makes right. Because centaurs are nomadic, they often come into contact with other, more established group. It has been the status quo for a very long time that the centaurs were an exploited and oppressed lot, always wandering and always being taken advantage of. Golus' own father, a former chieftain, didn't dare to upset this paradigm. It was due to seeing him stoop and compromise that Golus resolved to make a stand, and to lead the centaurs to take what they were owed.

Shortly after his father's death, Golus was leading the herd through the lands of the bear folk when they came upon a discouraging sight. A force of the bear folk, in a line and carrying their heavy, blunt weapons. They looked like an immovable force. A line of the massive beasts, encased in the thick, crude plate typical of their design. On the open plain, the centaurs would be able to simply run around the cumbersome ranks before them, but here in this narrow valley, with its dense growth… no. This was the bear folk's world. The den father stepped forward, the belly of his armor a dented shield from the kingdom of man. He sniffed the air and grinned, revealing a row of yellowed fangs. Leaning on the long handle of a heavy halberd with a vicious-looking spike, he demanded the centaurs hand over what resources they had before being allowed to pass. The bears in the phalanx ahead elbowed one another and laughed in their throaty, guttural fashion.

Golus didn't think. He didn't give an order to charge. He simply leapt forward, striking at the head and chest of the den father with his hooves, ringing out against the metal of the helmet. The bear folk and centaurs alike froze. No one had expected this. The struggle ensued and the spell was broken. Bears rushed forward to punish the insolence they were seeing and centaurs rushed forward out of rage, not entirely sure what they were doing. Golus wrestled the halberd away from the gigantic extortionist, striking out with sharp hooves all the while at knees and shins. The bear stumbled, falling on his back. Golus reared, bringing the weapon up high, and bringing it down with all his might. The spike slammed directly through the breastplate and ribcage, finding the tough heart below. One hot spray of blood later, and it was done. The two forces met, and a suddenly demoralized bear folk were washed over in a tide of vengeance.

The bears were routed, the way was clear, and the centaurs had remembered who they were. It was time to stop being pushed around. It was to time to stand up. It was time for Golus to show the way for the raging hooves.

“You can't fight, but don't even try running away.” 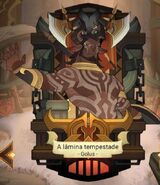 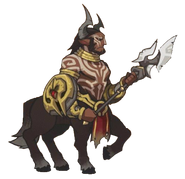