"The soul of an awakened weapon resonates with the bond of understanding."

Gear Resonance is a feature available at the Library. It can raise all low Combat Rating gear worn by heroes to the same tier, reducing the players need to work on levelling and finding the correct faction for each individual low-level gear they already own.

They say that on the battlefield, your closest comrades are not your brothers-in-arms, nor your horse, but something more easily overlooked and much closer to you – your armor.

It protects your body, sharing your blood-soaked fights, reveling with you in victory. Yet heed me now, even when your prayers to the gods fall on deaf ears, your armor shall still be there to protect you.

And so from plight to plight, the armor you possess grows in quantity, each piece a symbol of your glory, each crack and tear a silent scar of loyalty to you.

When this loyalty becomes strong, so strong that all battle armor resonates as one, their souls are awakened. The physical realm is transcended, making sharp weapons sharper and protective gear stronger.

This resonance will accompany you in your upcoming campaigns, derived from your existence, becoming your strength.

I’m not the first person to discover this, and I certainly won’t be the last.

A Hero before resonating.

A Hero after resonating. 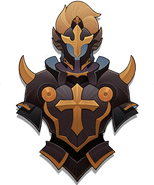