"Is there ought more beautiful than dancing flames?"

Framtom is an agility-based warrior from Hypogean faction. His skills revolve around fire and flames. Framton is capable of dealing substantial damage to his enemies, as well as some crowd control. He can also buff his own Attack and Defense Ratings using his Fists of Fire ability.

Fire; the first light mortals had to counter the darkness. Upon mastering fire, mortals no longer feared the darkness. Illuminating darkness. Dispelling cold. Expelling monsters. As long as they had fire outside their homes, the mortals of Esperia believed the evil demons would be kept at bay.

Unfortunately for them, not all demons fear fire.

Since the day of his birth, Framton craved fire. He embodies the longing for flame possessed by all Esperia's living beings, a manifestion of their lust for fire. Lutos pooled the inborn desire of all living things for flame, their geed projected into a single being. Thus, a Hypogean fueled by a morbid fascination with fire was born into the Esperia.

In Framton's eyes, the flames were an ever-changing engima. Flickering, waning and blazing, he was fascinated by them, his urge to reach out and touch the burning brightness sometimes too much to contain. He was mesmerized. The burning of the fire was such sweet suffering, it stirred within him a frightful and deadly elation. Instinctively, he inhaled the flame before him, fizzling, he followedthe searing sensations as it coursed his being.

Driven by insatiable lust, he searched high and low for more fire, any fire. Natural fire, mortal fire, magical fire... all were inhaled, drawn into his being to become a part of him. As he grew stronger, his tastes became more refined. He came to sample the quality of the flame by burning himself. Only flames capable of burning his body were fit to be devoured.

Framton's standards became ever higher, so much so that little satisified his tastes. He came to roam the world, seeking the purest, uniquest of flames, desperate to sate his hunger. After prolonged research and experiments on flame, Framton realized that only a certain few very rare and special fires were capable of producing such pure flame, and that such pure flames could not be obtained through any kind of synthesis. Thus, he turned his attention to fire-born species... Phoenixes.

It is said the Phoenix folk possess the purest of flames, a legendary fire inherent exclusively to their species - the Solaris Flare. It was only natural that Framton became obsessed with finding and devouring this legendary flame. Through years of devoted searching, his perseverance paid off. Framton found the home of Phoenix folk, and one by one, massacred them all, with Talene's mother amongst them. However, having consumed these supposed-legendary flames, he now realized these were not the flames he hoped they would be.

Framton's hopes were crushed, he immediately descended into an ebittered restlessness. He wanted that Solaris Flare, but not a single crumb could be found. Enraged and dismayed, he incinerated all that surrounded him, bathing the land in a sea of flames.

One night, Framton rained down destrution on a village at the edge of the Dark Forest. The buildings collapsed amidst the all-consuming flames, the sky glowing an eerie purple hue. Everything was reduced to ash. Satisfied, Framton prepared to leave, when suddenly something at the edge of the flames caught his attention. A Phoenix Flower. A hint of residual magical power emanated from it, protecting it from the destruction of the blazing fire.

Plucking the bloom, Framton put it in his mouth, carefully discerning and assessing the residual magic essence on the bloom's petals. A rush of excitement filled him, the simultaneously familar and unfamilar taste of the bloom making him shake. This was it, the Solaris Flare. ertain of its extinction, he had all but given up on ever discovering it. But now, this changed everything! His flame of desire was rekindled, he wanted that Solaris Flare. He turned towards the Dark Forest, birth place of Phoenix Flowers, home of the final Solaris Flare.

"All I ever wanted is to see the purest fire with my own eyes. How beautiful would that be?" 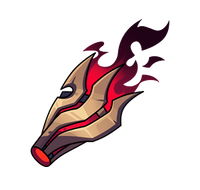 Specially crafted vambraces that have grooves etched into the metal, allowing Framton to better control his flames and wreak even more destruction on his unfortunate foes. 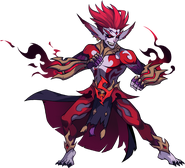