Fawkes is an agility-based ranger marksman of the Lightbearers faction who is known for completely immobilizing one enemy into his coffin, rendering the trapped enemy to be able to contribute only after Fawkes releases them after a period of time. He is also able to remove ailments from the allied team.

Fawkes is a man of few words and there are very few people alive who know his story. Even his real name is seldom used, with most of those in the business referring to him as “Death's Defeat”- a nickname he acquired through his reputation as a top tier vanquisher of the undead and unnatural. Fawkes pursues his quarry relentlessly, and handles them without mercy.

On the rare occasion that he isn't working, Fawkes lives a quiet, simple life. Unlike most people, adventure equates to work. This wasn't always the case, however. As a child, he would often venture deep into the dark forests near his home, disappearing into the trees for hours or even days at a time. He wasn't, however, alone. Fawkes had a companion who matched his childish temerity, Raine.

Once, when exploring the dark heart of the wood, the two young adventurers stumbled upon a yawning cavern. Unable to resist the temptation, they ventured inside. Their luck was against them that day. The cavern was the workspace of a murderous necromancer. The necromancer was present when they entered. He couldn't let his secret get out, and besides, two fresh bodies were a valuable asset in his line of study.

The two children were no match for the necromancer empowered with vile spells. They were restrained, and the ritual began. Wicked knives were placed beside altars, and strange symbols were drawn on the floor in animal blood. In a twist of extreme fortune, a group of demon hunters had witnessed the children's entry to the cave and had followed them in, using them as a welcome distraction to catch their prey by surprise. They barreled in, weapons bared and protective incantations swirling around them. Though they had the drop on their target, he managed to escape.

The ritual hadn't progressed far enough to begin the sacrifices, but nonetheless, the children weren't completely unscathed. Fawkes had already been infected by an incorporeal parasite, an entity possessing an intelligence and a will of its own. Through the stern and careful instruction of his saviors, he learned to control the thing that lived in his left hand. The group trained Fawkes and Raine in the ways of combat, tracking, and survival. Eventually, Fawkes even learned to use the parasite as a power source invigorating him with a power unknown to most common folk. The parasite's will still pulls at his mind, but he'll never succumb to its force.

Fawkes has no permanent home. He is a nomad, wandering the land in search of those who would inflict their dark machinations on others. Wherever he finds them, he tears them out root and stem.

“If it died once it'll die again”

An enchanted casket containing a horde of malicious spirits.

When the ability Purification is used, allied heroes with more than 60% of their total energy will be immune to control abilities and have their defense rating increased by 5%. Effect lasts 5 seconds. 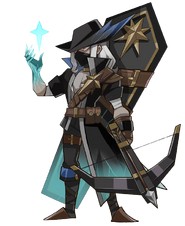 Fawkes' Hero Banner.
Add a photo to this gallery
Retrieved from "https://afk-arena.fandom.com/wiki/Fawkes?oldid=7647"
Community content is available under CC-BY-SA unless otherwise noted.