"How does it taste, old friend?"

Fane is an agility-based support hero of the Graveborn faction. He uses his skills, such as the Prisoner of Despair and Soul Impaler, to weaken enemies while also buffing his allies. His ultimate ability, Malign Judgement, to disable the enemy with the highest Attack Rating.

Even as a child, Fane had worked out how to get his "enjoyment" from butchery. He toiled with his cousin, the butcher, in the open-air abattoir in Bantus. There were heaps of catfish from the Andades Archipelago next to mountains of cattle and sheep carcasses. As the city's meat supplier, every day was busy and tiring.

Occasionally, some special "delicacies" appeared--plundered Ya, trussed up in piles and smuggled into the abattoir through dark and shady channels. These "livestock," despite their resemblance to humans, usually tickled Fane's fancy. Fane possessed the singular talent of being able to flawlessly skin a Ya in one go. Even though his work gave him no time to rest, Fane found "extra delight" in coming up with inventive ways of "handling" these Ya. For example, should the thick ropes which restrained them be loosened even slightly, many Ya would begin fighting to escape. The greater they struggled, the greater the pleasure in cutting their throats.

In time, word of Fane's knack for flaying spread across the city. At least the residents of Fisherman's Lane began to avoid him, averting their gaze should they be forced to pass him in the street. As the conflict with the Lenu continued, Fane was sent by General Morden to a place where his unique talents could be put to good use--a prison where captured enemy combatants were interrogated. There were no reeking, open sewers like those on Fisherman's Lane, nor any rotting, fly-blown meat, nor strange glances from passers-by. The only things in the tiny cells were the constant shrieks and howls of agony bubbling up from tortured human souls. Here, Fane found the perfect place to hone and perfect his talents.

It was not long before Fane welcomed a familiar face to his dank, oppressive interrogation chamber: General Morden. The venerable old veteran was suspected of collusion with enemy forces and treason against the crown.

"Ah, suspicion... As I'm sure you know, General, suspicion is a terrible enemy who can never be totally stamped out. What do you think?"

Even when Fane thrust his white-hot hook through the old man's jaw, the veteran of countless battles remained expressionless, divulging none of the "intelligence" that Fane so keenly sought. After all, there is much more backbone and character to grizzled old soldiers than to dainty, pampered nobles. It was while Fane was contentedly tidying up his beloved instruments of torture that he had an idea.

A few days after his interrogation of the General, a riot broke out in the prison. It was during the chaos that a very important prisoner managed to get free from the depths of the dungeon and escape. The value of this mystery prisoner became apparent when Fane was summoned forthwith to the emperor, to whom he duly submitted a detailed report of the interrogation. The report not only contained confirmation of a personal connection between General Morden and the current prison warden but also presented "evidence" of collusion between the two to instigate a riot. The General was executed, and Fane ascended to the position of the warden himself, gaining the very thing he desired the most--the circlet denoting himself as the ultimate authority in prison.

After Thoran returned to Bantus to rule in the name of the Fallen King, the old war prison become the Black Prison, in which all those Graveborn who dared revolt against Thoran were incarcerated. Now a Graveborn himself, Fane was also given his biggest stage yet. The emerald green eye, placed in the center of his circlet, suddenly opened. This evil eye was an extension of Thoran's despotic power, able to peer into even the darkest corner of the deepest dungeon. Fane, too, had already become the most cunning and cruel of all Thoran's minions.

"The land of the dead is in chaos anyway, so why not enjoy myself?" 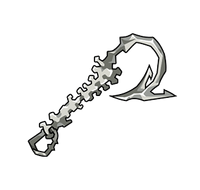 Fane plucked this bone hook from inside a Ya. It was in this way he came to learn of the differences between human and Ya skeletal structures. Unfortunately, his inexperience lead to an unfortunate outcome, with his Ya specimen soon breathing its last breath. The moment the Ya perished, Fane found himself awash with a great sense of joy, thus he decided to keep the object as a part of his collection. The Bone Hook is coincidentally the torture instrument most feared by the condemned.

Each time an ally enters or leaves the Bone Prison, they are granted a shield that has a value equal to 250% of Fane's Attack Rating that exists for 5 seconds. This effect can be triggered once every 8 seconds. 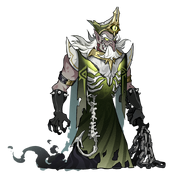