"For king and country!"

Estrilda is a strength-based warrior hero of the Lightbearer faction with a variety of skills that help her team. She can buff her allies' attack rating, reduce the attack rating of her enemies, and possesses crowd control skills which can make her enemies busy, or interrupt actions.

Estrilda's ultimate ability "Joust" knocks back an enemy, allowing consecutive damage to be dealt to them.

Professional military bearing, swift and decisive in action. Not especially girly in some aspects, but more capable and assertive than many men.[1]

House Rayne is a noble family with a glorious history. One generation after another, they have produced some of the finest generals, officers, and knights the kingdom has ever known. Many of Esperia's victories would never have been grasped had it not been for one Rayne or another, sometimes leading an inspired charge, sometimes cutting down an enemy commander, sometimes simply watching their orders carried out from a nearby hillside. Their contribution is such that the history of the kingdom is intertwined with their own, inseparable from their very identity. Estrilda, a daughter of House Rayne, had a peaceful upbringing typical of a girl of noble birth. She was provided a top-notch education and training in the arts as her brothers sparred in the courtyard with blunted swords to the yelled encouragement and laughs of her father and uncles.

When she was only ten, she watched as the male Raynes saddled their horses and readied their supplies, giving quick instructions to the men at arms milling about the courtyard. They would ride off to some skirmish as they did every few seasons, but this time the younger Raynes, Estrilda's brothers, would come along. They were old enough to see some blood. It wouldn't do them any good to be soft, said their uncles. Estrilda watched them form up and march away, where exactly she couldn't say as she seldom left the castle grounds. It was supposed to be a routine patrol. Some chases, some skirmishing, a casualty here and there and the accompanying payments to the widows of the fallen men upon the return home.

After weeks of no word, a few terrified and malnourished men returned to give the news. Through some fatal error, the patrol party had found themselves far from help and greatly outnumbered by a Mauler tribe with a serious grievance. House Rayne's men, from the youngest to the oldest, were gone. No heir now sat in their hall. Despite their wealth and reputation, their power was already waning.

Estrilda set out immediately to restore her families place in the kingdom. With barely a moment spent grieving her loss, she put down her paintbrushes and books of poems and picked up a sword. Under the tutelage of the castellan and the quartermaster, she set to studying tactics, strategy, and and every art of warfare from horsemanship to knife fighting. Though the kingdom had never before had a female general, she knew that were she to prove herself, they couldn't turn her down. All she needed was a chance.

At sixteen, The king called a great tourney to honor an important anniversary of the kingdom's founding. Estrilda disguised herself and entered the tourney disguised as a peasant boy. Through feats of marksmanship, duels, and a hectic melee, she rose ever upwards in the tourney rankings. The young men, eager to prove themselves, fell before her one by one. Throughout the competition, she had worn a rusted old half helm, keeping her hair up and her face dirty. When at last she was named champion by the king himself, she met his gaze without a trace of fear, removing her helm so that her long golden locks spilled down her shoulders.

The king looked into her eyes. He didn't see pride or arrogance there. Estrilda was a picture of resolute courage and cold, hard ability. Softly, he asked “So you want to be a knight, girl? This is the life you wish?” Her expression remained still. “It is.” He nodded and looked to his councilor, who simply shrugged. “So be it. Give the girl some decent armor and a sharp sword.” Estrilda dropped the old half helm to the churned ground. “My thanks, your majesty, but I'll be outfitting myself. I am a Rayne.”

It didn't take long for Estrilda the knight to become General Rayne, safeguarding her house's legacy, for at least a little longer.

“A valiant heart has no room for fear.”

A banner bearing the crest of House Rayne. A symbol of their indomitable spirit.

When Estrilda is on the frontline and still alive, all damage received by her backline allies is reduced by 5%. 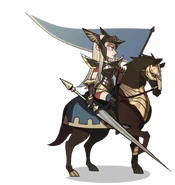 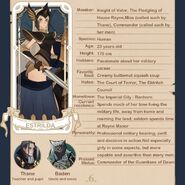 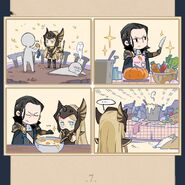