Elijah & Lailah are intelligence-based support heroes of the celestial faction. As one of the most frequently used Celestial heroes in the game, Elijah and Lailah excel in mitigating frontline damage and speeding up allies in boss fights. Elijah focuses on restoring the health point of his allies, while Lailah focuses on their energy points. They also create a 'union' between two of their allies, allowing those allies to mitigate the damage both of them receive whilst increasing one another's attributes.

Their ultimate ability "Hope" greatly increases the speed of all your heroes and allows them to use their own ultimate abilities faster. At level two, it also removes any negative effects placed on the ally team and temporarily prevents them from being controlled by enemies.

It is said that wherever there is a handshake or a warm embrace, there is also Elijah and Lailah. Whenever two people are able to reconcile their differences and resolve a dispute, they will usually offer up a silent thanks to the twin gods, and rightfully so. The two deities were charged by Dura millennia ago to forge peace and cooperation between mortals. It is their duty to repair the cracks between people and to foster good ties between them.

The twins do not work alone, and in fact, are generally seen as two halves of the same whole. Each complements the other both in the manner and in the execution of duties, and their names are used interchangeably by the people of Esperia. They were created from starlight in an ancient and dark era when savagery and brutality reigned, and the only cooperation between mortals was used to wage larger and more destructive wars. Dura couldn't bear the destruction and loss of life any longer, and so the twins were made. They set about first ending the largest conflicts, and then fostering the gentler nature of Esperia's people. Under the calming glow of the twins' starlight, Esperia became a kinder place.

Elijah and Lailah foster this goodwill and understanding by weaving innumerable fetters, which wind through the hearts and souls of mortals and pull them together. Under the influence of these powerful, invisible forces. Hated enemies feel their enmity falling away as the twins do their good work, setting aside both weapons and vows of vengeance. Broken friendships are mended, betrayals forgiven, and truces made. Now, however, the deities are beginning to feel almost powerless. Though they continue as always to bring the world together, the Hypogean invasion and subsequent chaos have stretched them to their limit more than ever before. Still, they know that the greatest tests lie ahead of them.

"Let us show you a better way"

A pair of headdresses that allow an uncanny connection between the wearers.

To view the transcribed version of this guide, see Elijah & Lailah/Usage Guide. 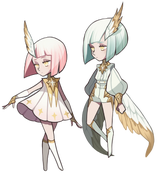 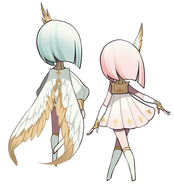 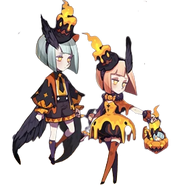 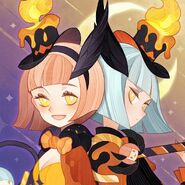