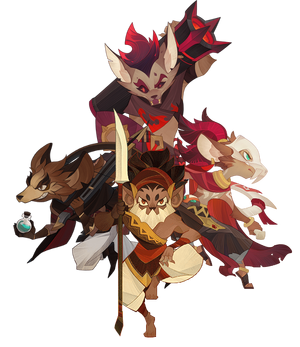 Durri (CN: 鼠人 Shǔ rén, "Ratmen"; JP: ワーラット Wāratto, "Wererats"), are a sub-race of Ya, primarily living amongst the Maulers. There are currently four Durri playable in-game: Vurk, Skreg, Drez, and Kren. Though initially referred to as merely being a "tribe", they're confirmed to be their own species, at least in the English translation, by being listed as such on Kren's Wanted poster. Having been present from launch and having more playable characters than any other type of Ya, they are one of Esperia's most fleshed-out races.

Though referred to as rats in other languages, along with being pejoratively called "rats" or "mice" by characters such as Ankhira and Safiya, they physically have little in common with rats and are commonly mistaken for canines or mustelids by fans — likely the reason for their being reclassified as a separate, fictional rodent species in localization.

All known Durri have brown fur, large ears, and clawed hands and feet, and are on average about 1.4 meters (4'7") in height. They may or may not have tails, with Drez having a fluffy, highly-visible tail like a fox, Kren not having a tail at all, and Vurk having one that is never seen by the player. Whether or not Skreg has one is unknown.

All durri seen so far, except for possibly Skreg with his chin guard making it difficult to tell, have thick fur around their cheeks and jaws. Vurk refers to it as his "whiskers" and Kren refers to it as a "beard", so it's unknown whether it's a species-wide trait or only possessed by males, especially since no female durri have been shown.

Durri are naturally timid, with those seeming to be missing the instinct entirely — most notably Vurk and Kren — being rare exceptions. However, some are able to consciously suppress the instinct, through either great effort like Skreg or through necessity like Drez.

Vurk mentions in Voyage of Wonders: The Fractured Gallery that durri are born in litters, and they multiply very rapidly.

Durri live deep underground in warrens, with most of them preferring to spend as little time as possible above the surface. Voyage of Wonders: The Road Home reveals that their warren, or at least one of them, is located at the Lightbearer-Mauler border, neighboring the Lightbearer city of Chesterton.

They are structured in colonies, each typically considering themselves to be part of a whole instead of individuals. Compassion, even for their own families, is rare but not unheard of among them; bonds like Skreg and Vurk have as brothers seems to be limited to a small, personal scale, not placing nearly as much importance on any other siblings despite their being strongly implied to exist. Their chiefs are democratically elected, and serve a role as protector.

Due to their relatively sheltered way of life, their knowledge of the outside world varies sharply, as evidenced by their current chieftain mistaking an angled piece of railroad track for a sacred artifact they know as the Divine Moon, while a durri fisherman was in possession of another piece of the track, fully aware of what it was.

When above ground, they use their superior numbers to ambush and overwhelm prey, their typical weapons being poisoned knives and crossbows, with direct combat being a last resort. Other Maulers consider this strategy cowardly yet begrudgingly effective. Durri who hunt individually are usually that way due to unorthodox circumstances, such as Drez having been orphaned and Vurk's outgoing demeanor being an anomaly.

Along with disdain for their fighting style, other Maulers tend to look down on and discriminate against them for their natural disposition, to the point of being considered expendable by some such as the hunting group Drez was once part of, their last words when leaving him for dead dismissing him as "just a Durri". However, their reputation among most other Mauler tribes has improved in recent years after news of Vurk's escapades in Arachin territory spread.