Demonic Incursions is a limited-time Voyage of Wonders stage available from October 5, 2021 until October 19, 2021. In order to collect the chests scattered throughout the stage, players must help the Frontier Regiment seek out food and water and then destroy the demons. Five outlying camps will send soldiers to assist the player.

The first camp in the row leading towards the crystal chest is designed for the player to lose to, so be sure to pick a weak hero to sacrifice to it.

There is 1 crystal chest and 11 gold chests to collect. There is also a bonus 12th gold chest that can be obtained by firing a cannon into the wheat crops. It provides the player with gold coins to spend at the Town's Shop for food.

The frontiers of the Lightbearer Kingdom were always fractious, the garrisons here act as a solid wall, protecting every inch of the kingdom's territory. This time, the Frontier Commander of the garrisoned forces was ordered to lead his army to clear the frontier of the evil that was trying to encroach upon the king's land, but by doing so he stumbled into a deadly trap, and finds himself surrounded by nefarious demons on all sides.

The commander made a quick decision to set up camp to buy time for his men, and to look for ways of breaking through the siege. Food and water is about to run out, and the demons are getting closer and closer with each passing hour. On the brink of defeat, the emergence of two brave Wilders has given the Commander what he and his men need most: renewed hope. 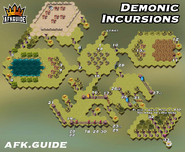 The following rewards can be obtained by collecting all of the crystal chests:

The following rewards can be obtained by collecting all of the gold chests:

Lorsan: The wind is whispering to me. Lightbearer troops stationed nearby seem to be in danger. That's the Frontier Regiment's banner.

Eironn: Let's go ahead and investigate.

Frontier Commander: My Wilder friends, how did you get here? Did you break through the demons' siege?

Lorsan: The wind led us to you. Do you require assistance?

Frontier Commander: We're here to strike at the demon stronghold located nearby. However, while we were marching, we became surrounded by demonic forces. Our only option is to stay put for now.

Lorsan: The wind speaks to me, there is water and rations nearby. Perhaps we can clear a path for the regiment?

Frontier Commander: Brilliant! I can spare you some of my men, they can help you on your way. They're currently garrisoned at five separate camps on the outskirts. Each camp can provide you with a soldier. Everyone else must remain to fend off the demons.

Eironn: Let's set off. The wind is urging me forwards.

Game Log: The regiment is besieged by the demons, and lack food and water. Help the Frontier Regiment seek out food and water and then destroy the demons. Five outlying camps will send soldiers to join us.

Lorsan: You can count on us.

Game Log: By helping the villagers clear out the nearby demons and open the town's gate, they will be willing to provide food and water to the regiment.

[Step into town to the northwest]

Eironn: The road has collapsed. Looks like we can't go back the way we came.

Lorsan: Let's go into the town first and see if we can open the town's gate and return via the main road.

Game Log: The road we came from collapsed, we can't go back the way we came. Go and check out the town.

Shopkeeper: Welcome! What can I do for you? Food? I can give you food, providing you have enough gold... No money? Sorry I'm afraid I can't help you.

Old Villager: Thank you for helping me open the gate to town. We'll send some water to the regiment.

Game Log: Water has been acquired. Report to the Frontier Commander.

Frontier Commander: Thank you for the water.

[Speak to Remote Village near the crops]

Emaciated Villager: Food? We have some left, but it won't last us very long. You see? Our wheat is nearly dead. The only source of water is to the west, but the demons are blocking the way. If you can help us clear a path to the water, we will gladly provide you with some of our grain.

Eironn: Leave it to us.

Game Log: Help the villagers clear out the demons from the nearby field and the path to the water source, in return for food.

[Speak to Remote Village near the crops again]

Emaciated Villager: Thank you for dealing with the demons. We'll send the regiment some of our grain.

Game Log: Food has been acquired. Report to the Frontier Commander.

Frontier Commander: Thank you. All we have to do now is open the gate that leads to the demons' domain, and prepare for war.

Lorsan: The demons' domain is just ahead. Messages carried by the wind bring bad news. The demons ahead are strong, perhaps it's not the best time to attack.

[Lose to the camp]

Frontier Commander: My friends, we're here to assist you. My scout tells me the gate to the demons' domain is wide open. Leave the demons on its outskirts to us! Soldiers, attack!

Eironn: Only one more to go!

Lorsan: These demons shall feel the power of ice!

Emaciated Villager: What's that noise? Oh no! My crops!

Lorsan: The smell of burning is carried on the wind. I hope nobody was hurt.