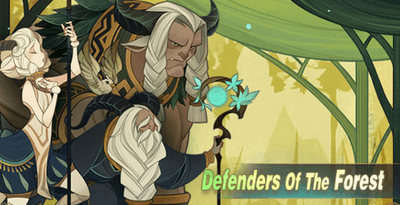 "The forest will prevail."

Defenders of the Forest are a union of Wilder heroes.

Deep in the heart of the forest stands an ancient, gargantuan Oak. Its Branches are themselves larger than many trees, and they cover an area that could easily house an entire community.

It is Yggdrasil, and for thousands of years it has bathed its surroundings with a placid green glow. For centuries, Arden would come to Yggdrasil and commune with it, placing his gnarled hand on its gnarled trunk, bowing his head with eyes closed, standing in silence for hours or days. The tree has knowledge buried in its core which even the most wizened Oak Sages haven’t yet grasped.

But something has changed. In his last visit, Arden sensed a deep sorrow emanating from the tree, from root to leaf. Strange vines, with which Arden was unfamiliar, looped around the massive trunk. The emerald shine of the tree was dimming, the leaves appearing withered with fading color. This was indeed an ill omen.

Arden returned to the tree the following day. He stood, frowning at the vines, preparing to settle his mind into the trance-like dream state he used to speak with Yggdrasil. There was a rustling behind him as a graceful white shape emerged from the brush. Nemora. She wore a grave expression.

“Something needs your attention. A Dusk Watch patrol found tracks near the lake that don’t match anything we know. They fear that they could be Hypogean, but they wanted confirmation from a higher authority. Can you spare a moment, wise one?”

Arden’s frown deepened as he nodded his head and set off wordlessly in the direction of the lake. He moved slowly, leaning heavily on his cane. Nemora slowed her gait to walk by his side. As they approached the lake, a stench hit the pair that was unmistakable. Plants were withering, and many didn’t look like they would have any chance of recovery. A trail of charred, sooty earth ran through the growth. There was no doubt as to what had caused this.

“They’ve broken through the protection spell. I didn’t expect it to be so soon.” He turned, lightly grasping Nemora’s arm. “Notify the Dusk Watch at once. They need to mobilize all available resources and increase recruitment. The war has already begun."

Before she could bound away, a thundering roar pealed through the trees. It wasn’t a sound heard often, but one could never forget it after hearing it once. It was Ogi, and he wasn’t happy. They looked to the sound and back at each other. Arden gave a single quick jerk of the head, releasing Nemora’s arm, and she darted toward the commotion, hooves clattering over stones and logs.

A hulking form towered over two Hypogeans. Ogi was the largest thing living in the forest, and even these vicious demons seemed to be wearing their twisted, cruel expressions as a mask for the fear that froze them in place. In Ogi’s left hand were three small chicks, peeping frantically, their nest and the branch which had held it laying broken on the ground. The Hypogeans, as they smoldered through the underbrush, had apparently snapped the limb off the tree. The cries of the distraught chicks had woken Ogi, who had happened to be dozing in a pile of twigs leaves nearby.

Nemora was filled with revulsion at the creatures sullying the place, but Ogi was rage itself. Slabs of muscle shook as he slammed his fist on the ground, and even the leaves on nearby trees shuddered with the impact. He snarled at the two demons.

He charged headlong toward them, which broke their fear paralysis. They turned heel and made off faster than Ogi could manage. There was no way he’d catch them. He saw it immediately. Without a second thought, he hefted a nearby boulder in his right hand, the left still gently cradling the chicks. The stone flew through the air, landing on one of the invaders. A sickening crunch and a red mist signaled its success. The other ran even faster, fearing the sudden weight of another stone. It wasn’t to come. Though the creature was running full tilt, it detected a rapid approach of hooves at its back. The moment it turned, drawing its weapon, Nemora’s spear bit through its ribcage nearly exiting through its back. It shrieked and clasped at the haft for a moment before slumping to the earth.

Ogi stood, panting, his rage quickly turning to despair as he watched the chicks, hurt and overstressed, cling desperately to life. Nemora cantered up, wiping the blood off her spear.

“Hey don’t worry, big guy.” She placed her own hand, palm down, over the chicks. Ogi felt a serene warmth flow up through his arm and watched as a deep green glow leaked from between Nemora’s delicate fingers. When she pulled her hand away, the two chicks were good as new, sleeping contentedly. A shuffling in the brush announced Arden’s arrival. He saw the broken branch and nest and detected the residue of Nemora’s healing spell. Without having to ask, he tapped the tree with his staff in the place where the limb had been broken, and a new one began to sprout. It grew rapidly, and in one spot several twigs grew into circles, weaving themselves into a nest. He gestured, smiling, toward the replacement home. Ogi approached and with great care, softly placed the sleeping animals into their new home. He looked to Arden. In his emotional state, he was even less articulate than usual. He placed a massive hand on the old sage’s shoulder.

“Join us. Our home and all its inhabitants need to be protected. I think you could help us save this place.”

Ogi nodded fervently as Nemora looked on, a small smile playing on her face.