Cecilia is an agility-based ranger hero of the Lightbearer faction. At the beginning of battle, Cecilia will appear behind the enemy that mirrors her formation position and ambush them. She is able to cast a divine circle on her enemies to reduce their attack rating.

Cecilia's ultimate skill "Judgement Day" summons a divine blade upon the enemy who currently has the most 'Symbols of Sin’, damaging them and further increasing the number of symbols above their head by 1. The amount of symbols can stack to increase effects against opponents.

It is the duty of the path to locate and root out heretics, a duty the path's redeemers undertake with fervent determination. The redeemers are a convent of devout women who, though firm believers of Dura, tend to follow more closely the example set by Athalia, Harbinger of Justice. Athalia channels the light into cleansing energy, washing away darkness in purifying flame. She is disciplined, pure, and purposeful. She has been the bane of the wicked for millennia, allowing the light to become a pillar and beacon of civilization. She is the hand that brings Dura's light to the world, just as the redeemers hope to do.

Cecilia had never considered a life of service to the temple. She was largely content with her modest existence, and seldom wanted for anything more than what she already had. Even sight was something that only stirred fleeting curiosity in her. She had been blind from birth, and felt comfortable navigating the world with her other senses. A comfortable home, a loving husband, and good health were the things she cherished, and she had them all.

Her husband was a good and dutiful man, and his sudden disappearance caused her a good deal of alarm. Though many of the other townsfolk simply assumed he had left, she knew it wasn't possible. She searched for days. One by one, clues piled up and she learned of his death at the hands of occultists. Something in her changed on that day. She calmly made inquiries and preparations, waiting for the occultist's next gathering. At nightfall, when they congregated, she came to them. None of them survived her visit.

She had gotten her revenge, but the person who had kept the small home and tended gardens was gone. She saw now what her purpose was. She had to continue this undertaking, to weed out not just her husband's killers but everyone like them. It wasn't long until she was discovered by the path of ascension and recruited into their ranks.

In her work, Cecilia's blindness is an asset. The illusions and deception of demonic entities go unnoticed, and she performs her work with grim efficiency. The light guides her, and she bears it resolutely into the dark.

"Your eyes will betray you. The light will not." 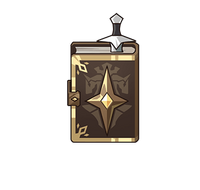 A divine book that contains prayers used to exorcise demonic spirits and drive away evil.

All allied heroes including Cecilia recover 200 energy points and a total equivalent of 150% worth of Cecilia’s attack rating as health over 5 seconds whenever the ability 'Judgement Day’ kills an enemy in less than 5 seconds. 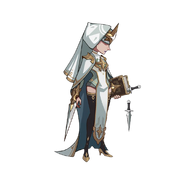