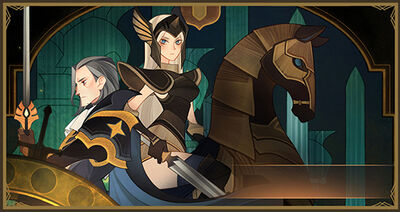 Castellans are a union of Lightbearer heroes consisting of Thane and Estrilda.

Estrilda would often sneak out into the formerly stately gardens surrounding the Rayne estate. They had been in a state of disrepair for some time. She would play with her elder brothers and cousins, but those brothers and cousins, the boy anyway, had all perished in a battle that was catastrophic for House Rayne.

Sometimes in big groups. The voices of those children had long been blown away. Estrilda marveled that the condition of her family had come to match that of the garden.

He stood at the center of the garden near a dry fountain. Thane. His single arm held ready for the sword strapped to his waist. "Teacher!" She bounced toward him, waving with rapid little motions. He gave her a curt nod and unsheathed his blade.

Estrilda drew her own in response automatically. She wasn't conscious of the steel leaving its sheath. They began to spar, filling the unkempt gardens with the ringing of blades. Every evening they would meet and work on her swordsmanship.

Though Estrilda had vowed to reclaim her family's lost honor without a male heir, they had decided to keep their arrangement secret. It had taken months of constant badgering to convince him to instruct her, but finally he acquiesced, and truth be told, it seemed as if he was happy to do so.

She progressed quickly from a skinny, clumsy girl to a quick, efficient fighter with flawless instincts. Feeling that her skills were plateauing after years of practice, she was determined to defeat Thane in their next bout.

Thane had more experience in his one remaining arm than Estrilda had in both of hers, and everything she knew at the point had been taught by Thane himself. She had never been able to defeat him. He was careful and moved only as much as he need.

She was a storm of blows. Flurries of strikes almost anyone else would have found impossible to parry. But he did, and as he did he watched and waited. Every time it ended the same. There, a weakness. His blade at her throat. Another loss. She was frustrated.

"You have a lot of courage, but that's not always going to win the fight." He grumbled.

"How am I ever going to be good enough? My father was the most renowned general this family had produced in generations."

"Why does someone with your skill settle for being cooped up in the castle grounds? Surely you're capable of greater things..."

"Your training is over." He turned away, towering his head. "There's nothing else I can teach you." It was true. He was amazing with a sword, but he was only one man. Anything else she wanted to know had to be learned outside of her family's holdings.

She left it at that. Sheathing her sword, she gave him a quick bow and left the garden. Thane was reminded of his old friend, Baden. He had always seen his old friend in Estrilda's eyes. It was like he was looking out at him.

Thane remembered the sacrifice his friend had made, a sacrifice he would continue to repay.