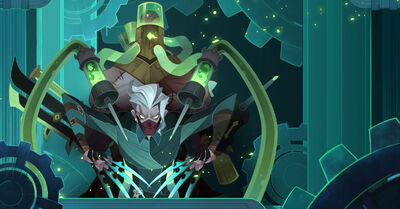 "This is my finest creation!"

Brains & Brawn is a union of Graveborn heroes consisting of Silas and Izold.

I must admit, seeing a living, breathing man at the Necropolis gates was rather surprising. Quite how such a feeble human managed to avoid the roaming soul-eaters of Kings Manse and make his way here is rather baffling.

As far as I know, he is only the second living human to venture into the Realm of the Dead. Looking at him reminds me of my former self.

He, too, has come here seeking a cure. He said he was once a warrior, but he was seriously maimed in a fierce battle, rending him useless. Nevertheless, a raw, chaotic ferocity still burns deep within him.

He said he'd seen dozens of famous doctors, tried all kinds of treatments... All to no avail. Of course such mediocre quacks couldn't help this gravely wounded man! Instead, they aggravated his wounds with some backwards treatment that left any hopes of recovery in tatters.

But for me? It's a trivial matter. I'm not like those charlatans. My unconventional methods are the cure, I'll breathe fresh, new life into his old, broken body.

When I was still alive, I knew only too well the frailty of the human body. For this reason, I have decided to entirely replace his mangled body, and forge for him the immortal body of a Graveborn.

Although I've performed such transplants on Graveborn a great many times, I've never performed such procedures on the living. The risks are quite unknown, but I am certainly willing to take them.

None of my past creations have brought me satisfaction. Mere walking corpses with no mind or awareness, empty husks. Even after carefully fine-tuned reconstructive procedures, they are just mindless zombies, blundering around to barked orders.

But, this human... He is different. He's a warrior, a wild beast. Even without fangs and claws, there is still a terrible ferocity in his bones.

I shall do all in my power to keep his brain and his thoughts intact, to ensure the source of his strength is retained. It is vital his thirst for violence and combat persist.

Just to be on the safe side, I have invited Niru to assist me with this experiment. In his previous life, Niru was an outstanding surgeon. During this reconstruction, he exhibited exquisite craniotomy technique, flawlessly extracting the subject's brain.

However, the rest of the process wasn't quite so smooth. When I transplanted the brain into its new body, there was a volatile rejection reaction. Thankfully, I had stashed some immunosuppressants into my exoskeleton earlier, just in case of such an emergency. The subject's rejection reaction was promptly eliminated, and his brain was successfully linked to the new body's nervous system.

What comes next is my specialty! I implanted a carefully calibrated alchemical device into his new body. From this device flows my painstakingly formulated alchemical hormones, capable of enhancing the subject's physical abilities. That's not all! The device also carries a volatile acid compound which, through atomization, can be converted into a dangerous explosive gas. The subject has become a biological weapon of mass destruction!

Once everything was done, I roused the subject from his sleep on the operating table. He clearly needs time to adapt to his new body, his movements are clunky and lacking co-ordination. Seems it'll be a while before the testing phase can commence, but speaking as an undead Graveborn, I have plenty of time and patience.

As everyone knows, the School of the Dead is divided into two branches: the Spiritualists and the Metamorphs. The Spiritualists focus on the art of Necromancy, whereas my branch of Metamorphosis is rather less orthodox. We propose greater usage of alchemical technology to amplify necromancy, tapping into the unearthed potential of a corpse.

These divergent ideas have created quite the impasse between the two branches. Following the rise of we Metamorphs, the Spiritualists have continually tried suppressing us. In the eyes of the Spiritualists, we are merely vile heretics that pollute the art of Necromancy.

Long have I sought proof that alchemy can breach the limitations of Necromancy, and now an opportunity has appeared right before my eyes!

The subject is now moving as he pleases, in full control of himself. We have finally entered the performance testing phase. During testing, the subject's strength, reactions, and regeneration all exceeded my expectations. More importantly, with his extent knowledge of combat and his wealth of experience, his performance was flawless! He is an incontrovertible murder machine! Vastly superior to all those worthless 'defects' I've made in the past.

Final conclusion: Izold is by far my finest work, a true masterpiece!