34 at time of death; reverted to physically 21 post-resurrection[1]

Thane - Former brother-in-arms; does not remember him

Baden is an agility-based Warrior hero of the Graveborn faction. He was added in patch 1.18. He’s what could be called a “Snowball Hero” - when Baden can survive long enough to summon a lot of phantoms, he’s extremely strong and can overwhelm enemies.

Baden's ultimate ability "Phantom Assassin" creates a phantom clone who shares his abilities at the cost of reducing his own health and attack rating.

Current: His death left him with a deep loathing, and the hatred festering in his heart was magnified. He has become a malevolent Graveborn driven by his resentment of death. Yet, within his heart there still lingers a tiny grain of kindness and sanity.[1]

Baden was once a Rayne, and had a life typical of the men of his house. He studied hand to hand combat, tactics, strategy, supply logistics, horsemanship, and a slew of other skills to forge the consummate soldier and battlefield leader every Rayne man must be. Though the young men of most noble houses opt to join the king’s army as enlisted officers, the tradition in house Rayne is that each new generation shall enter service at the lowest rank. This ensures that upon reaching command positions (usually within a short span of years thanks to the massive head start the boys receive at Castle Rayne), the future lords and knights of House Rayne have a complete understanding of the entire chain of command.

He got to know his comrades, men from all walks of life, in barracks and taverns, but it was on the sparring ground that he made a true friend. Thane was the best swordsman he had ever seen, surpassing even the swiftest blades of his family’s men at arms. Thane was glad to finally have spirited competition, Baden was happy at a chance to continue improving his skills, and they got along well from the start.

If it was the sparring ground that made them friends, it was the crucible of combat that made them brothers. This got them out of one fight spot after another, but eventually it would also mean tragedy. Both men were parsons of courage. Never shying away from the frontlines, they would look for places where the fighting was the most heated, or seek to bolster a part of the line that faltered with their incredible presence and prowess. Thane’s hubris, however, finally got them into real trouble. During a skirmish in Mauler territory, Thane overextended himself, seeking to break the enemy early on by personally destroying their leadership, he unexpectedly met his match. The chieftain he faced was every bit the natural fighter he was, but with a speed and strength no man could hope to match. When Baden saw his friend, trainer, and comrade struck down, he went immediately into action. There wasn’t so much as an instant that he considered his chances against a warrior who had just incapacitated the finest blade he knew.

He leapt over the prone form of his friend, blade raised to strike and teeth gritted against his adversary. It was only a matter of moments before Baden too lay broken upon the hard, sun-baked dirt, his breastplate crushed under the Mauler’s gigantic blade. He gripped Thane’s hand, and with a few last shaky breaths, died. Thane would be found and carried away by the army’s medics, still unconscious and never seeing his friend’s still face staring blankly up at the sky.

A battlefield attracts a variety of scavengers. Crows and other animals enjoy a grim feast as pragmatically-minded denizens of the land pore over the bodies, relieving them of the valuables the victorious army misses in their perfunctory search. In the darkest hours, even less savory individuals come out. These are they who have the darkest intentions for the remains.

The necromancer who found the corpse of Baden recognized his value. He knew the scent of Rayne blood, and counted himself lucky to have stumbled upon such a worthwhile find. He resurrected the corpse, weaving a strong net of spells as he did so to control the mind of the resurrected Baden utterly. He would be little more than a proficient tool for leading the other resurrected.

What the necromancer couldn’t know about was the undying will and sense of humanity that persisted in Baden’s unbeating heart. This was a person of far more noble character than the average man. His convictions, sense of purpose, and devotion to his house and kingdom and been unwavering throughout his life. No matter how strong the spells of control may have been, they were eventually eroded away by the constant insistence of Baden’s better instincts. After years of servitude, what remained of Baden finally slipped its bonds and retook control of its vessel. The necromancer’s death was swift and clean. There was barely time to express surprise at the resurrected ignoring a command before the sword was pinning the sorcerer to the back of his chair.

Baden thought he was free. But that very night, while looking up at the scattering of stars, he felt the old familiar feeling creeping back into his mind. He felt himself sinking back to the depths as the old spells reknit themselves around his heart. The necromancer had returned from beyond the veil of death, now as a spectral lich. Though the spirit of Baden still watches from its confinement, the body belongs to the lich.

“I will take what I want, and keep what is mine.”

Each time a total of 4 phantom Baden's disappear from the battlefield, Baden will initiate the effects of his “Phantom Strike” ability. 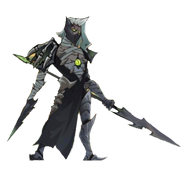 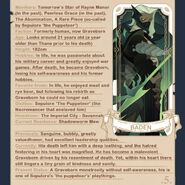 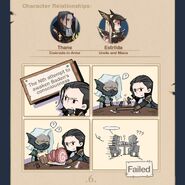