"Changes happen at every moment."

Audrae is an agility-based Ranger hero of the Celestial faction. An agile and adept hero, Audrae has strong consistent DPS output.

Her ultimate skill, Cosmic Shower, creates meteors that can damage multiple enemies. Countless streams of light converge together, astral stars bouncing their brilliance off one another, illuminating and igniting the endless silence of night's darkness.

Although both born of the Zohra Nebula, since the moment of manifestation, Audrae could not be more different from her sister.

Whereas her sister is dominated by a compulsion to maintain order, Audrae spends every moment of her existence breaking the rules, roaming and exploring. Such unbridled curiosity fuels her endless reverie, yet not so much as to neglect her practical capabilities, at which she excels. In the eyes of her sister, Audrae is nothing more than a wild child, naive and foolishly taking risks and jumping headfirst into trouble. Audrae would not disagree with such an assessment, her innocence and fearlessness driving her to test her own abilities. It occurred to Audrae that the stark difference between her and her sister was likely owing to their both as opposing aspects of the Zohra Nebula, one as Order and the other as Chaos. Playful by nature, Audrae loves discovering everything new and is excited by the novel. Despite her sister's loathing of her unpredictability, she doesn't stop Audrae from her pursuits. Audrae is free to come and go as she pleases, but she will always return with tales of her adventures to tell her order-loving sister.

She has now decided to follow in her sister's footsteps and head to Esperia, making use of her power to aid her big sister and the world that she has come to love. Although she considered departing before the journey's end, she has changed her mind, choosing to stay and fight the Hypogean threat, just as her sister is.

Audrae is reminiscent of a galactic poet-philosopher. Romantic, pure and enraptured by the stars. Whilst the sisters are entirely different in personality, Audrae has a great love for her sister, as well as her love for the cosmos. Even if the universe is gradually eroded by the darkness, her desire for discovery will never wane, nor her passionate pursuit for the truth. Yet, no matter how far she roams, the bonds the sisters share will always draw Audrae back to her sister. Her big sister is the start of every new journey, and the finish line of each journey completed.

When Audrae’s will was still her own, the Zohra Nebula was on the brink of annihilation. At that time, a voice from far away sounded by her ear, calling to her: “Audrae, it is time to wake up.”.

Opening her azure eyes, she found herself hurtling, together with the blazing black stars all around, towards the chaotic, dark, and twisted abyss. She raised her head and, seeking the source of the voice, found herself being watched by eyes identical to her own. Thus Audrae knew it to be her sister, Morael, born in the same nebula as herself.

If Morael represents order, control and correction, then Audrae in turn symbolizes all that is free, uninhibited and exploratory. Audrae was possessed of a natural fascination with mysteries unknown. Even in the midst of frenetic activity to save the Zohra Nebula, she was wont to drift off in a trance, oft forgetting her purpose or the task at hand. Long disapproving of her sister’s behavior, Morael was able to correct the trajectory of the Zohra Nebula, allowing it to withstand the pull of the dark abyss. Audrae, however, would often flit about the celestial expanse, coming and going as she pleased. Her travels would even lead her, misguided, to that dark realm, whence she sought the truth concealed in darkness. Audrae, however, cared naught for all that, and never took her sister’s criticism to heart. She was part of the Zohra Nebula’s innate will to survive, so her very existence must therefore have meaning. If the root cause of the Zohra Nebula’s destruction could not be found, then even if disaster was temporarily averted, there was no guarantee that such a threat would not arise again in the future.

Even in the midst of such conflict, this final farewell could not be prevented. Audrae, racing excitedly back from outside the nebula’s boundary, had wished to share with Morael all she had seen and pondered. However, for the first time ever she witnessed an expression of powerlessness on the face of her sister, she who had always been in total control. Silently, they watched as the dark abyss inexorably swallowed the very thing to which they owed their existence.

The nebula faced its own demise with a struggling, reluctant whimper. Audrae, already affected by Morael’s low spirits as they bore witness to the chilling finality, found herself shaken by such a scene. This was the first time in her existence that she had directly sensed the impermanence of the universe.

The essence of the nebula that still lingered was transformed into the Heart of Zohra. This granted Morael the extraordinary ability to construct a solar force field, and became the terminal proof that the Zohra Nebula had once existed. The flickering, dying light that the star cluster emitted at the end became the core impetus behind the Cosmic Shower. This fell into Audrae’s hands, thereby entrusting her with all the hope and power that had once been the nebula’s.

Although she no longer had to bear the burden of responsibility for the nebula’s future, Audrae nonetheless had a vague awareness that she could not simply stop there.

What was that powerful force that destroyed the Zohra Nebula? Where might that dark abyss, which had so voraciously swallowed up their whole nebula, eventually lead? Were there other existences, analogous to their own, elsewhere in the vastness of the universe?

These questions kept nagging Audrae, rendering her restless and irritable. Morael, however, could not understand her sister’s preoccupation with such queries. As the entity responsible for order, she always admonished Audrae to simply follow the rules as she did. In truth, she held that Audrae’s inaction was ultimately to blame for the final fate of the Zohra Nebula.

“Audrae, your recklessness will bring nothing but disaster.”

“But things change all the time, Morael. Perhaps randomness and disorder are the true nature of the universe.”

With that, Audrae bid farewell to her sister, who was so stubbornly disapproving of it all, and decided to seek her own answers.

No longer bound by order, she was free to follow her own instincts. She explored star after star, planet after planet, roaming the universe wheresoever the solar winds blew her. She passed by deserted and overgrown planets, and discovered an existence similar to her own, deep in one of the furthest corners of the universe. She transformed the power entrusted to her into a stellar bow and arrow, with which she fought against the malicious darkness.

She loved her adventures, never feeling alone nor scared of the unknown. No one can say how long it took but, eventually, she touched upon a tiny corner of fundamental truth about the universe.

It was a shadowy abyss, where order had been thrown out of balance and evil festered. Dead planets loomed within, perhaps even the nebula which once had been her home.

This was the place known as the Void Realm. Here were the forces of destruction, chaos and disorder continually engendered by a dormant, hidden will. These negative forces spread, affecting the outside world, and might one day reduce the entire universe to empty nothingness…

Morael was lost in contemplation as she listened to her long-lost sister recount all she had seen and experienced. There was also no denying how she shone like the very stars themselves, having broken free of the rules and order she had once imposed on her.

Moreover, that small corner of truth at which she had peeked was the same as the answer Morael herself had found in Esperia.

“Pure order or disorder is not the guiding principle.” Audrae extended her hand to her sister as she spoke, “Perhaps we should work together, and seek where the truth ends.”

Morael gazed at the outstretched hand, and sighed deeply.

“Unimpeded exploration may bring us one step closer to the truth.” 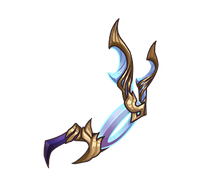 A bow and arrows formed from the condensed residual energy of the Zohra Nebula. The light and power of past stars is contained within, and only in divine hands may its true power be awakened.

Enemies that receive damage from “Cosmic Shower” have their Received Healing reduced by 50 points for 6 seconds. This effect cannot be stacked. 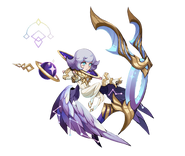 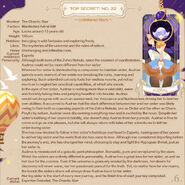 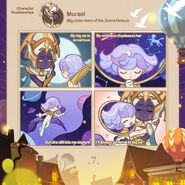 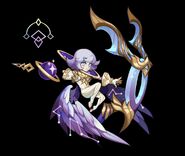 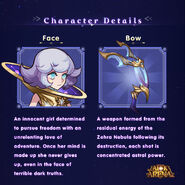 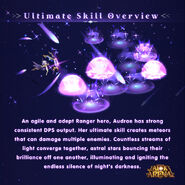 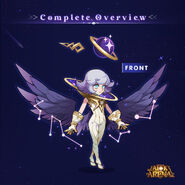 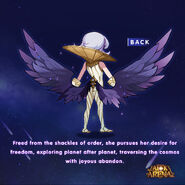