Astar is an intelligence-based support hero of the Wilder faction.

The breeze sweeping softly through the Dark Forest tousled Astar’s hair, rousing her from her sweet sleep. Rubbing her eyes, she looked upwards through a break in the leaves, peering at the sky above. The gentle breeze passing through carried upon it greetings and wishes from seemingly everywhere, and like a messenger, carried them off again. Behind her, the Phoenix Flowers were an explosion of fiery reds. Yawning lazily and stretching out her sleepy limbs, she snatched up the little lamp beside her and bounded off into the distance.

According to Legends of old, the Phoenix Flower bears the fragrance of Solaris. As long as the Obsidian Finches continue to reside high up in the mountain peaks, watching diligently over Esperia, those precious Phoenix Flowers will never die out. That day the final surviving Obsidian Finch, Talene, was reborn, a gigantic tree deep in the Dark Forest began to bloom fiery red…

Another resounding cry from within the Dark Forest’s depths startled the resting birds. The individual in question leaped out of the bushes, landing gingerly at the edge of a meandering brook. Behind him echoed cries to help extinguish the fire, accompanied by a cloud of thick, black smoke. Astar dusted herself off with her hands, put her tiny lamp aside and checked her sooty reflection in the flowing water. Her nose had been blackened.

“Tamtam,” Astar plopped down into the floor and delicately patted the small round head poking out of her front pocket. “I helped burn all the weeds like Uncy Kiele wanted, so why is he angry ?”

The peculiar round critter called ‘Tamtam’ blinked and waggled its ears, then affectionately nuzzled against Astar’s hand, seemingly to comfort her. As if helping her thoughts form, Astar places both her hands on her own head, the little flame upon her crown flickering and dancing as if in sway with her thoughts. She recalled the words of her only teacher and mentor, the Old One, the sole other Phoenix Flower sprite she’d ever known. “Fire is your power. Use it to protect yourself, to bring an end to evil, and give hope to others, but remember, some things cannot be resolved with it.”

The profundity and importance of these words was lost on Astar, but asking the Old One for help was impossible – they’d already returned to the Source. The other forest folk see her as a nuisance, doing all they can to keep their distance from her, even though she truly is only trying to help them out… Every single time, it ended in flames. Deflated, Astar took solace in Tamtam’s soft reassurances and quickly perked up. “Nevermind! Flames have always solved everything up to now!”

It all began when Astar was born of the largest Phoenix Flower bloom in the Forest. She has little in common with her Dark Forest compatriots, her existence seeming in stark opposition to theirs. Her playful nature bubbles with curiosity and is blessed with an innocent naivety. Astar is always excited to learn about the new and unexplored. She picked the Phoenix Flower that she grew inside her and fashioned it into her very own lamp, just like the flower lamps carried by the other inhabitants of the Forest. The moment she shakes her tail, the little flickering flame atop her head flashes to life, blazing with her sense of curiosity and desire, leading her towards the destination of her interest. Alas, she has yet to master her control of fire, and consequently causes accidental fires wherever she goes. Unsurprisingly, many of the Forest dwellers complain loudly about this issue, often ready to knock her door down in anger…

As the Old One always used to say, tirelessly and at great length, “Astar is surely mischievous, but never malicious. With enough practice, her powers of flame-wielding will serve good ends one day in the future.” He would never tell her off when her mischief brought complaints, instead listening to her explanation patiently and kindly with a sincere smile. It came as a shock that after what was indeed not such a long time, this kindly wise Old One would reach his life’s end, his flame of life going out barely a year after Astar’s birth.

Even though their time together was brief, Astar couldn’t help feeling a sense of loss. Once the feelings of loss subsided, she was awash with a renewed sense of freedom, burning bushes and igniting fields with reckless abandon, watching through childish giggles as the Forest folk ran around in panic. But that was short-lived.

Before long, the loneliness set in. She searched for another sprite like herself, but to no avail. Lighting fires to attract attention only drew the ire of the Forest folk, leading to complaints and reprimands. Astar was at a loss, with no clear direction or guidance. On days like those, she’d miss the Old One and his guidance for a spell. He never seemed worried about Astar’s independence, whether or not she’ d cope by herself after he returned to the Source.

So much so, that on the eve of his final night, he smiled and told her, “Even though I won’t be able to teach you anymore, you’ll meet other people in your life. You’ll come to understand what you need, and what love and hope are.” Despite believing she understood, she hadn’t yet truly grasped his words. She began learning how to use her fire powers to help others, except her poor timing and lack of skill would end up landing her in hot water. Right now, her mood once again uplifted, Astar’s nose suddenly twitched. Carefully picking out the scent on the breeze, as she detected a hint of something malign carried on the wind. She hurried to duck into a nearby bush, silently peering out through the shrubbery to observe what was coming. There they were… Hypogeans, tearing through the Dark Forest’s protective barrier, laying waste to everything in sight.

“Tamtam, there’s a bad guy being mean to the trees and animals! Shouldn’t we protect them?” Tam blinked hesitantly, anxiously headbutting Astar’s fingers. “Right right! As long as Astar protects the forest, no-one will say Astar is a useless dumb-dumb anymore!”

Believing this to be Tam’s way of encouraging her, Astar patted Tam’s head and spurred herself on. Yet, at just that moment came a beautiful avian warble. A powerful, elegant figure, vaguely obscured by light, spread it’s magnificent wings and descended from the heavens, obliterating the Hypogeans in a wash of searing flame… the same flame Astar herself possessed. Astar was dumbstruck. Only when the figure turned around, did Astar see the flame burning fiercely on the forehead of the beauty. Astar thought, “Incredible! But this same flame, why is it so much more powerful when wielded by this beautiful lady? It’s like a totally different flame! Astar doesn’t really get it, but if Astar keeps following the pretty lady, Astar will surely figure it out!”

Hurrying to catch up, Astar piped up, “Where… Where are you going? Astar can come too, right?” The lonely, aimless Astar of old was no more. Now, she had a direction and a goal to work towards. Just watch, a little fire can solve a lot! 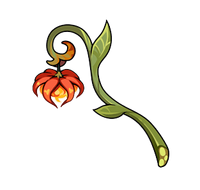 A lantern made from Phoenix Flowers, it brims with the fiery power of the Solaris Flare. It has the ability to ward off evil, and bring hope into people's hearts.

Every time the healing effect of the Ultimate ability “Life Sparks” is used, enemies within the same AoE as Life Sparks are dealt 160% damage.