"No matter where I am, I shall lead."

Arthur is a strength-based tank hero of the Dimensional faction. He attacks with his sword Excalibur, which boosts his attacks, forms a blade aura, and creates shock-waves. Arthur also utilizes a shield to reduce the amount of damage he takes face on.

In ancient, misty Albion lived a legendary king. This king was not ascended through some accident of birth, but rather it was magic that brought him his crown. As a boy at a tourney where warriors greater than he tested their mettle against one another, he ran to fetch a sword for another. Seeing a gleaming blade lodged in a stone, he pulled it free, unaware of the prophecy he had just fulfilled. Many rallied to his name on that day, but many more sought to deny him what prophecy had promised. Through one bloody trial after another, he began to unite his land.

Eventually, the sword he had miraculously pulled from the stone, the very sword that had made him king, was shattered in furious battle. Despite this symbol of his right to rule being destroyed, the young king didn’t despair. He sought the help of a wizened advisor who often proved capable of great and unexplainable feats. The king was taken to a lily-covered lake of still, black water. He stood at the bank and as he watched the surface, he saw a gleaming sword rise from the middle waters. It was held aloft in a fair and delicate hand which seemed to shine against the green and black of its surroundings. Rafting out to the center, he took the blade. A worthy weapon for a worthy king.

He formed an order of knights of the highest echelon, living paragons of virtue and righteousness. They met at a great round table, a symbol of their equality in character and truth. With these knights by his side, He quested further and for greater goals. His kingdom grew and he was as beloved by his subjects as by his companions. Then the rift opened. The king was pulled through the rift into a strange land. The accents of the people were unlike any he’d ever heard, and he saw a number of strange and wondrous beasts. The people told him they called this place Esperia. None of them had ever heard of his kingdom at all. He knew he needed to return to his kingdom and his people. With little beyond his storied blade, he set off to explore this strange new land. 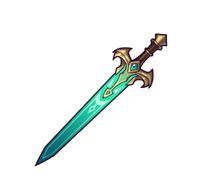 The legendary sword of King Arthur that was returned to him by the Lady of the Lake. It possesses an immense power that can only be wielded by The One True King.

Arthur rallies his team, raising the attack frequency of normal attacks for all allies standing behind Arthur by 50%. 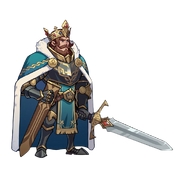 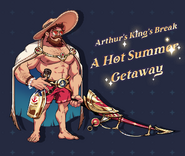 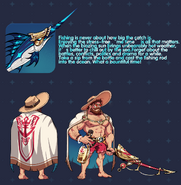 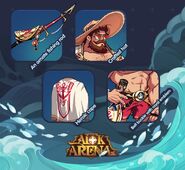