"I hear every heartbeat."

Arden is an intelligence-based hero of the Wilders faction who is notorious for Entangling Roots, a crowd control skill which can immobilize up to 3 heroes. With the haste buff, he will cast this skill almost every time the roots expire. He also gives his front-line allies a magic shield with damage deflection.

Arden's ultimate ability "Force of Nature" hits all enemies on the battlefield up to 5 times, dealing them magic damage.

Arden has lived a very long life and has accumulated a peerless pool of wisdom. The old sage is held in the highest regard among the Wilders, with many looking on him with something akin to reverence. As an Oak Sage, Arden is also in the highest order of the forest's conjurers. They are nature's will incarnate, the voice of the trees, the hand of the living world. Needless to say, his words carry considerable weight.

Though all Wilders call the forest their home and feel at ease among the towering trunks and swooping boughs, Arden feels the life of the place deep in his bones. He knows that the forest has a soul. He listens hears its joy in the sun's nourishing warmth, its sorrow at the axe's fall, its hunger and pain and overwhelming desire to propagate. It was in this way that Arden sensed the approach of the Hypogeans.

From the moment the Gate was broken, a looming unease began to grow like a parasitic weed. There was a sudden darkening of the forest's gestalt consciousness. Animals returned to their burrows or huddled in their nests. Flowers ready to bloom remained closed, afraid to open their petals to the world outside. Seeds in the ground refused to take root, afraid of what they would meet aboveground.

Arden couldn't quite say what the threat was at the very beginning, but he knew that dark times were coming, and that his people would need to be ready. The first step was to create the Dusk Watch. Someone would need to be posted along the woodland's perimeter if they were to ascertain exactly what was the source of this unease. He began speaking to the brambles and brush around the forest edge and the areas surrounding the villages of the Wilders, gently coaxing it to grow in tightly-knit walls of thorn and vine.

The aged conjurer knew, however, that in the coming times, the vast stores of knowledge he held would need to be shown to all. Not without a little trepidation, he opted to break with long-held traditions and share his wisdom in earnest. He began to teach the most talented of the younger generation many of the secrets he had uncovered over his years, encouraging them to bring this knowledge to their friends and families. If they were going to make it through this, they would need everyone operating to their fullest potential. Unity would be paramount. Evil was spreading in all directions, and like a corrupted river, one branch was coming for them. The Wilders would need guidance and an experienced hand in the time to come. Arden felt his new responsibility come to rest heavily on his shoulders. He didn't ask for this duty, but he didn't trust anyone else to do it. He would lead the fight. He would lead the resistance.

“Listen to the wind. Words ride on its every breath.” 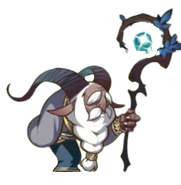 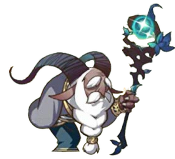 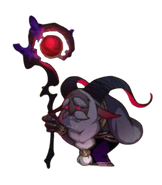 The Unhinged, featured in The Twisted Realm.