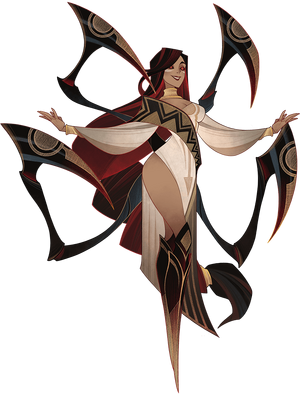 Arachin are a sub-race of Ya based on spiders. Their society is matriarchal and ruled by a single queen who carries absolute authority. The current queen, and the only individual seen so far, is Ankhira, though many others are known to exist.

Arachin primarily hunt by setting elaborate traps of webs and then poisoning their prey. Their venom is highly lethal, and one injection of it will make the victim suffer an excruciating demise as their internal organs dissolve. The brightness of an arachin's colors indicates the potency of an individual arachin's venom. This technique has proven so effective, especially after being perfected by Ankhira, that even Hypogeans have come to fear them after numerous attempts to invade them have ended in their complete annihilation. That said, their defenses are not completely impenetrable, as Vurk managed to infiltrate their caves and siphon Ankhira's venom for his own use.

As only a female has ever been seen, it's unknown whether male arachin share the highly humanoid appearance that females have.