"As you command, Lord Ainz."

Albedo is a strength-based tank hero of the Dimensional faction. Her ultimate skill "Ginnungagap" allows her instantly teleport to the most densely populated area of enemies and deals AoE damage to them.

Albedo is a crossover hero with Overlord.

Ainz… Lord Ainz, it's been almost a month without seeing you.

Is this some kind of punishment for me, your subordinate? this whole month without you here at Nazarick has been so trying...

I miss you with every passing moment. Your perfect grace and poise. The touch of your finger tips. Your voice brimming with dignity, yet not absent in charm and warmth, as you say this subordinate's name, "Albedo".

I don't know how it began or where from, but every time I see you, my Lord, this subordinate heart of mine swells with an intense hear, as if a volcano inside me is going to erupt with a magma of flowing love! It feels like it could explode at any moment...

Oh Lord Ainz! Every night without you I toss and turn, I just... I just need you here, in bed with me, so I can drift to sleep. Lord Ainz, please forgive this subordinate for any misdemeanor, I merely wish to leave my scent here on your bed, my Lord.

My dear Lord Ainz, have you made plans to return? Your subordinates are fearing for your safety... I know you are the mightiest of the Supreme Beings, ruler of the world and have the greatest magic power in existence, yet I... your subordinate, can barely detect your merciful, dignified scent any longer, here in your bedroom. What could possibly exist in this Esperia world that drew your eye and has enraptured your so?

I took it upon my meager self to investigate, and if it is to conquer the weak, worthless humans that you wish for, do not lower yourself to such paltry tasks! We subordinates shall eradicate them for you, my Lord... You, dear Lord, are the last of the 41 Supreme beings resident in the Great Tomb of Nazarick. If anyone in the world should offend you, or show you even the slightest disrespect, your subordinates will ensure they meet their end.

Oh... Lord Ainz, I can't bare this any longer! Please rest assured, the Great Tomb of Nazarick and all of it's affairs have been put in order by my insignificant self, and I also have Demiurge assisting in comprehensively strengthening out military defenses.

Lord Ainz, through your message I have been able to track your location, I am going to find you! Please, forgive this subordinate's selfishness, I'm sneaking out to find you alone. I... I'm so embarrassed to say it... but, this subordinate... my insignificant self, wishes to take the chance to accompany Lord Ainz alone on his worldly travels.

Do not fret, my Lord Ainz, for although the world is entirely alien, even a single man and woman travelling alone together... B-but! This subordinate of yours will certainly restrain myself and not behave in anyway inappropriately to my Lord! ...But, if Lord Ainz wishes it, you will find my meagre self is more than satisfied to give up my life for you...

"Oh merciful Lord... What could possibly be more important than serving at your side? To be able to accompany my Lord around the world, it is this subordinate's supreme honor..." 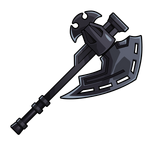 Tabula Smaragdina, Albedo's creator, secretly equipped her with a world-class item - Ginnugagap. It has devastating destructive power when used on objects. When wielded in Albedo's hand, it appears as a wand, with a black floating sphere at the top end.

During battle, the Defense Ratings of all Dimensional heroes are increased by 15% for every Dimensional hero that is in the allied formation. The effects of this ability can be stacked up to 2 times 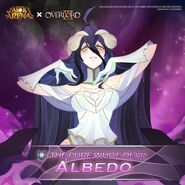 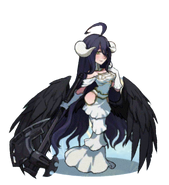