Alaro is an agility-based Support hero of the Mauler faction.

As for how I left the Dark Forest and became a Mauler scout, well, let me preface that with a personal opinion: One’s birthplace is no guarantor of how one will turn out.

They said that I was born different, and pointed to three facts: First, that I have no ability to climb. I can’t even ascend the easiest of the Dark Forest trees. Luckily, I gave up before seriously hurting myself. Second, I’m a carnivore. The scent of meat on my breath disgusts my vegetarian neighbors. Third, I do not have green skin, and am always thus the first discovered of my exploration team. No one would play with me, and eventually only Zorn remained my friend…

But really, I think there’s only one key difference between myself and the others: my eyesight isn’t great. In fact, I can only see things far away very clearly, and had to have special glasses made.

One day, my mother slammed a bowl of broth in front of me and fixed me with a stern gaze. “Alaro, tomorrow is your coming-of-age ceremony! What are you going to do?”

I cheekily downed my broth in one gulp, then slipped my copy of “Tales of the Desert” into my pocket.

I am the only one in my family to have failed the coming-of-age ceremony five years running. The ceremony involved banding together with other youths and venturing into the most secretive parts of the Dark Forest, before bringing back your very own trophy.

“Are the others still unwilling to partner with you?” My mother said with a sigh, “You'd best stop dreaming about going off and exploring the desert. Dreams can be dangerous, especially for Wilders.”

She was right, of course. The Dark Forest was peaceful and quiet, beautiful and temperate. The scorching sun, baking climate and struggle to survive, as recorded in my much-thumbed copy of Tales of the Desert, had never been an issue here.

“We have no enemies but time.” So proclaim the old Oak Sages, despite having already lived long enough.

But perhaps you are like me, harboring a longing for the unknown? A strong, innate thirst to explore, to find another home… One you can choose for yourself.

So that was that. When the day dawned for me to depart the Dark Forest, no one came to see me off or accompany me but Zorn.

A wonderful, fragrant heat accosted my senses, as I looked out past the mountains over endless yellow sand. Here and there were dotted the shadows of bleached bones, a reminder of the death which lurked in such a place, as quietly lethal as a lion dozing in the shade. Golden sand dunes snaked ever westward, seeming like a lonely dragon forever chasing the horizon.

I couldn’t wait to slide down the dunes like a boss. Close to the hot sand, I could hear the very heartbeat of the desert — the gurgling of hidden water sources, the rustling of busy beetles, the moaning of the broiling wind — all so familiar, as if seen countless times in my dreams.

Thus it was that I embarked on my desert wanderings. My yellow skin, so out of place in the forest of my birth, became my best asset, perfect camouflage among the baking sand. I visited the Devil’s Sandcastle, said to be the stronghold of the dangerous Quicksand Claws. There, I slipped some powerful laxatives into their dinner, before absconding with valuable treasures. I snuck into the Temple of the Seers, only to relieve myself on their mystical totems. The curses and shouts of the temple elders were a small price to pay. I wagered on mortal battles in The Crimson Arena, making a fortune along the way, and I almost died from a poisonous snake bite in the Bone Glades…

Ultimately, however, I chose to settle in Canter, a desert city illuminated by marshland. The city welcomes diversity, with merchants selling rare and exquisite goods brought from Mauler, Lightbearer, Wilder… Even Graveborn lands. I made a comfortable life for Zorn and myself, idling away the days drinking ice-cooled cocktails whenever I so desired.

“We have no enemies but time”, I lazily yawned to Zorn one evening.

Right then, I was lounging in the sand, basking in the gentler heat of sunset, when someone stepped heavily on me!

I quickly arose, fuming and ready to give a piece of my mind, only to find a Mauler before me. He bowed and begged forgiveness, explaining that he was an itinerant desert sage and meant no harm, but was merely meditating.

I looked this polite Mauler up and down. Half-falcon, half-human, his tatty, ragged garments suggested that he had, indeed, been wandering the desert a long time.

“Desert meditation?” I queried, “What is that?”

“I was just contemplating,” he replied, “that this desert is such a beautiful place, yet the war between the tribes has made it hideous.”

I shrugged, noncommittal and neutral.

“My people,” he continued, “say that soldiers find beauty only in blood. What is your view?”

“Is this not normal?”, I laughed grimly.” People are hostile to those who are different, and seek bloodshed, even if they are of the same tribe.”

The brightness in the Mauler’s eyes dimmed momentarily, as he shook his head. “This kind of hostility will gradually corrupt and erode the soul, until one loses oneself.”

I shouldn’t have spoken with such a philosophical lunatic.

The next time I saw him, it was in Canter, as the city shimmered with alchemical acid mist. The Falkin and Bearfolk had just fought a pitched battle, which I had missed by virtue of having gone to spectate at the Mauler hunting grounds.

Thriving markets, whole neighborhoods… All destroyed by alchemical munitions. I’d almost forgotten that this was still the Mauler desert, with all its intractable, never-ending hostility between tribes.

I frantically scoured the ruins for Zorn, cursing myself for not bringing him with me.

“Come with me.” The crazy philosopher had appeared behind me, and was trying to stop me searching. I knocked his hand away forcefully.

His next words stopped me cold: “Your friend is with me.”

Unconvinced, I nonetheless followed the madman towards the city outskirts. I had a poison dagger hidden away, ready to strike if he was lying to me.

I was stunned by the sight which awaited me as we breasted yet another dune: the glorious light of the setting sun, illuminating the billowing sand; hordes of people, setting up tents and lighting fires, stopping to acknowledge the philosopher. They praised him for helping them escape the bloodshed and find peace, as they debated, too, how best to rebuild Canter. And there, in the throng, was Zorn, smiling at me.

I went over, and wiped off the dust from Zorn’s straw-stuffed head. Yes, Zorn was a scarecrow, the only one who was there to watch me act tough when I was so ignominiously expelled.

It turned out that this philosophical lunatic was actually the leader of an elite team. Acting on a tipoff from his scouts, he’d preemptively relocated most of Canter’s residents, including Zorn, to safety.

“Hatred brings nothing but destruction. Only by relinquishing our prejudice, can a real home be built.” He extended his hand to me.

“My name is Skriath. What is yours?”

Skriath’s eyes seemed to hold a kind of magic, and I couldn’t help but take his hand and shake it.

“I, too, am an outcast.” Skriath said, and I saw myself in his eyes, “but we will find a home, together.”

I accepted Skriath’s horn and joined the Mauler scouts, because I knew, deep down, that something had seeped into my very soul.

The last of the twilight sun faded, as the first star began to shine. 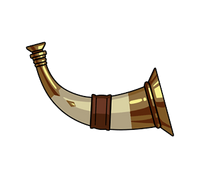 A horn gifted by Skriath. Having spent all its life on the arid dunes, its once sparkling metal has been inevitably dulled by the harsh desert winds. It shares a likeness with its owner, Alaro, it's not much to look at, but it can still deliver a message across a great distance.

Skill: All Too Easy

Passive. Allies within a certain range of Alaro recover health equal to 190% of his Attack Rating, and gain 30 Dodge points for the following 3 seconds. Each ally may only receive this effect once every 4 seconds.