"I am the Great Tomb of Nazarick's master, Ainz Ooal Gown."

Ainz Ooal Gown is an intelligence-based mage hero of the Dimensionals faction. His ultimate skill "Fallen Down" allows him to deal damage to all enemy targets after casting his ability.

Ainz Ooal Gown is a crossover hero with Overlord.

You! With that long magic weapon in your hand! Meet my gaze!

I am the ruler of the Tomb of Nazarick, one of the 41 Supreme Beings, Protector of Carne Village, Conqueror of Re-Estize, Great Rule of Life and Death, the Immortal King of Death and Glory!

Right, well, that's quite enough of that. I've been prattling on for far too long.

Don't let that long string of titles fool you. I'm just a gamer, like you. Maybe you find my appearance a be intimidating? To tell you the truth, sometimes even I can't get used to this skeletal body. I mean, not so long ago, I was no different than you... just a normal, flesh and blood body.

More accurately, I was one of you. From your world. Perhaps we can have a friendly chat?

As for what to call me, just call me Momonga. It was my first name.

Have your ever heard of the MMO Yggdrasil? I used to be the Guildmaster of Ainz Ooal Gown, the ninth largest guild in the game. In the real world, I'm actually pretty isolated, I don't have any friends, and my family are all gone, but playing the game gave me all those things that I lost in reality - I made friends I could trust with my life. We levelled up together to take down monsters, established a guild in the underground Tomb of Nazarick, and most importantly, regarded one another as family.

The day of Yggdrasil's server shut down, I sat alone on my throne in the Guildhall, awaiting the moment the game would be over.

However, there was an unexpected development... Instead of being kicked out of the game, I crossed into another world, together with my beloved Guildhall. I became my avatar, a powerful undead magic caster, and the NPC guardians resident in the Guildhall suddenly became self-aware and sentient.

I know nothing of the new world. But what I know for sure, is that I shall give my all to protect the guardians of this Guild, and to protect the precious treasures left here by my former companions.

Hoping to find other past Yggdrasil players, I changed my name to Ainz Ooal Gown. Whilst ensuring my name was well publicized, I worked to carefully conceal everything about The Great Tomb of Nazarick.

Now, I am the King of the Sorcerer Kingdom, the greatest magic caster in the world, and I have tens of thousands of subjects at my feet worshiping me! But really, the thing I miss most deep down, is those days spent levelling with my guildmates.

I just followed the essence of "Noctis Animarum" hoping to find old comrades, and it brought me here. I wonder if they still get excited about the game? I wonder if they're looking at me through a screen, just like you?

My dear friends, it's me, Momonga! Ainz Ooal Gown! Can you see me?

I shall find you! Whatever I must do - cross mountains, dive into the ocean, fly through the skies, travel the entire world! I will find you!

"No matter by land, sky or sea, let the name Ainz Ooal Gown echo throughout the world!" 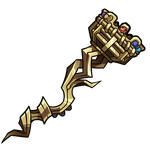 The Great Tomb of Nazaricks inhabitants created and dedicated this powerful relic staff to their beloved Overlord, Ainz Ooal Gown. Seven serpents coil around the magic staff, their expression pained as they struggle to contain the power of the gemstones in their mouths, each one concealing world quality artifact power. Not only does the staff represent the ultimate power of Nazaricks' ruler, but also holds within it the most precious memories of Ainz Ooal Gown and his Guildmates.

The chanting phase of the Ultimate ability "Fallen Down" is omitted the first time it is used.

Ainz's voice lines are in Japanese. Translated lines are provided where applicable. 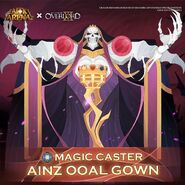 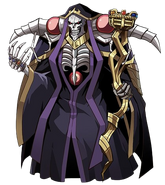 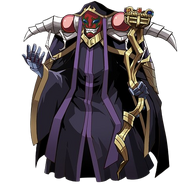